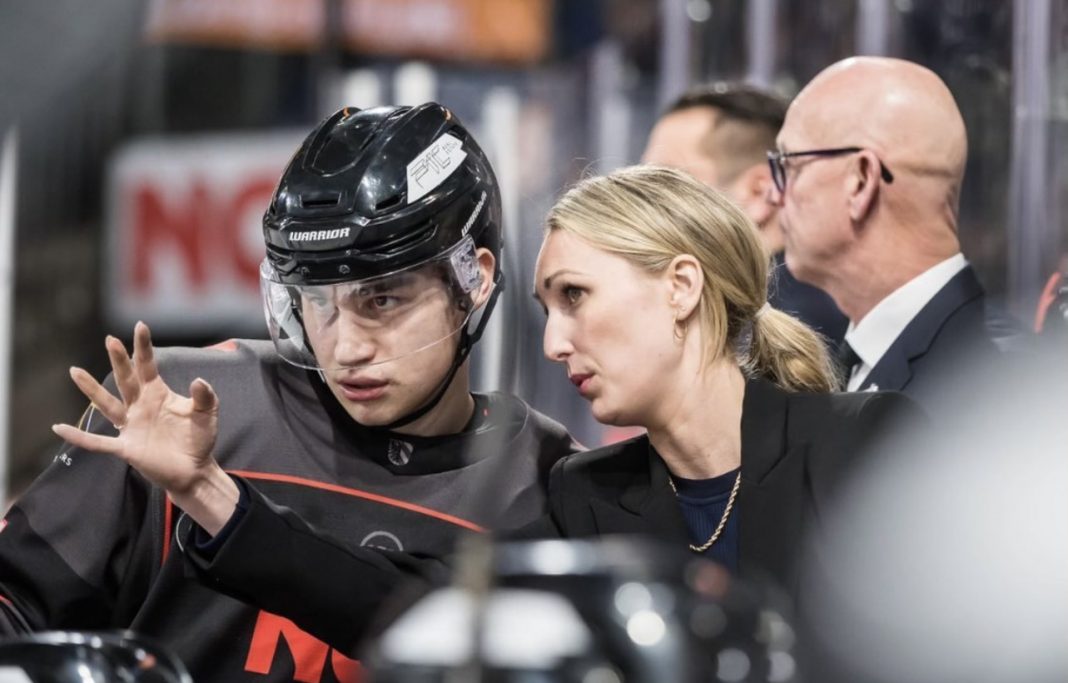 The Coachella Valley Firebirds on Tuesday announced Jessica Campbell as assistant coach for their inaugural season. The move makes her the first woman to hold that position in the American Hockey League—something the majors at the National Hockey League have yet to achieve.

The club—a top minor league affiliate of the Seattle Kraken—launched in November 2021 and will play their first season in the new $300 million Acrisure Arena set to open in December.

“My goal has always been to coach at the highest level of hockey,” Campbell told LAMag. “Joining the Coachella Firebirds is an honor—I’m excited to show up every day to make our players better and to make the organization as top notch as it possibly can be in its inaugural season.”

Campbell is a former player for the Calgary Inferno (2014-15 – 2016-17) and has instructed players like Tyson Jost and Damon Severson at her skating development school, JC Powerskating. Recently, she was an assistant coach for Germany at the 2022 IIHF Men’s World Championship—joining the coaching staff of a national team was also the first time a woman has done so.

Women joining the upper ranks of hockey teams is certainly gaining momentum. Even beyond Campbell’s appointment, 2022 has been an important year for women in the sport. As ESPN reported, several have been named assistant general managers such as Cammi Granato and Emilie Castonguay of the Vancouver Canucks and Meghan Hunter of the Chicago Blackhawks.

“We’re very excited to welcome Jessica to the Kraken organization as an assistant coach with the Coachella Valley Firebirds,” said Seattle Kraken general manager Ron Francis in a press release. “Her knowledge of the game and ability to communicate and teach will be important assets in the development of our prospects in the American Hockey League.”

But Campbell isn’t simply joining a team. Alongside head coach Dan Bylsma, she’s helping to launch a brand-new team in a brand-new arena, something that both agree will allow them the ability to lay the foundation for a team and culture worthy of winning.

“You want to build the organization and build the culture that aligns with the Seattle Kraken,” Bylsma told us, “and that’s a hard-working, smart, intelligent, fast, aggressive, and assertive hockey team.”

The Kraken will obviously play a role in the team’s growth, something Campbell recognizes as a clear advantage. “We all see it as a huge opportunity knowing we can build off what the Kraken organization is trying to accomplish—we’re a development feeder system and so we’re making sure that development is our focus.”

The Kraken will supply the players, Bylsma confirmed.

Bylsma had reached out to Campbell via the JC Powerskating website unable to find her personal email to discuss the role, something that for Campbell came as a surprise. “She’s got that skill, she’s got that ability to develop players,” Bylsma said. “She was the right person for the job.”

“I’m just honored that he saw me as the right candidate fit for the job, because that’s where I’m at. I’m trying to be a student of the game every day, but I also have the experience and the qualifications of working with the pro players.”

Being the first woman as an assistant coach is a major achievement and milestone for a league that has long been dominated by men, but for both Bylsma and Campbell, the focus is all on her ability to coach world class players. It’s undeniable that Campbell is adding to an already growing momentum well underway in the AHL and NHL.

“I think we’re going to continue down this path, there’s been a lot of prominent women in the game in really prominent roles and it’s a testament to their knowledge, their experience, and what they bring to the table.” Campbell says. “We all have something unique and different—coaching is coaching. We all have different skill sets, perspectives, and approaches to the game but at the end of the day, regardless of gender, it’s all about hockey.”

Want The Daily Brief sent to your inbox? Sign up for LAMag now!

Foam Finger: The Olympics Don’t Have to Be Extreme to Be Exciting