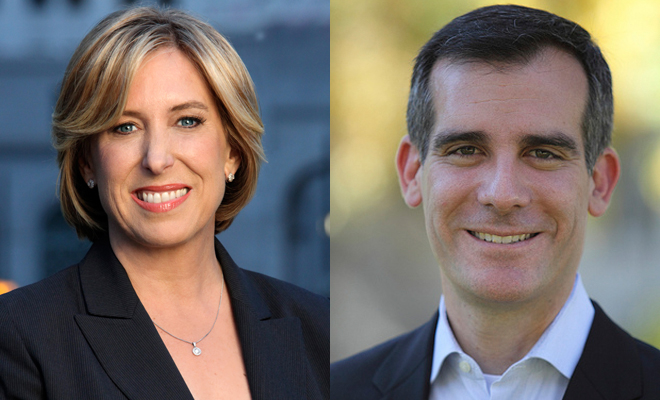 With less than 24 hours before the polls open in Los Angeles, mayoral candidates Wendy Greuel and Eric Garcetti are still shaking hands and squeezing in every last opportunity to pick up votes. Here’s a roundup of campaign news from over the weekend—plus where the race stands now:

Despite having a financial advantage thanks to organized labor groups, the latest USC Price/ Los Angeles Times poll, released Saturday evening, put Wendy Greuel 7 points behind Eric Garcetti. Her camp’s take: It ain’t over yet.

This year’s mayoral campaign has the distinction of being the most expensive. The Times reports spending exceeded $33 million over the weekend. Campaign reports reveal that 41% of the more than $25 million raised by Garcetti and Greuel were provided by independent expenditure donors not held to contribution limits. The really depressing part: A record low number of voters is expected at the polls despite all the cash spent to woo them.

As the race for the mayor’s office comes to a close, so do two other heated contests. Ron Galperin and Dennis Zine are competing to replace Wendy Greuel as City Controller, and Carmen Trutanich and Mike Feuer are running for City Attorney. We spoke with each of the candidates before the primaries:

Meet The City Attorney Runoff Candidates:
A Q&A with Carmen Trutanich
A Q&A with Mike Feuer

Meet the City Controller Runoff Candidates:
A Q&A with Dennis Zine
A Q&A with Ron Galperin

Not sure where to cast your ballot? Find your polling place. The polls open at 7 a.m.. and close at 8 p.m.