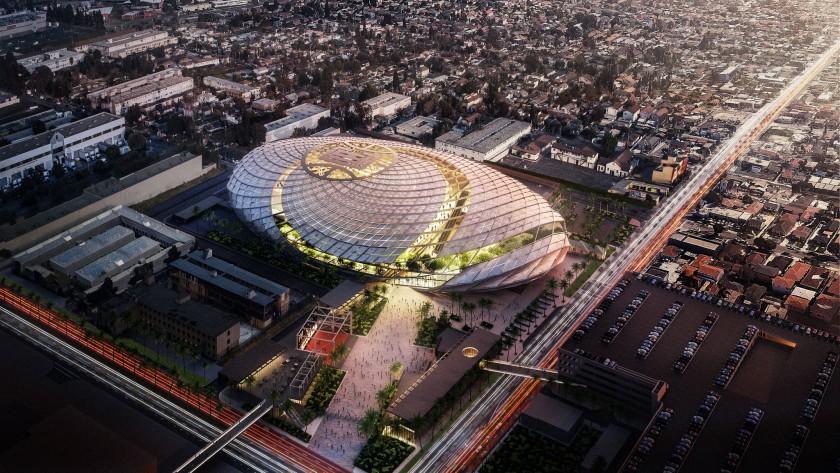 If everything goes according to team owner Steve Ballmer’s plan, the Clippers will be playing in a brand new, 18,500-seat arena starting in 2024. After years of discussions and legal wrangling, initial renderings of the new arena have now been released, revealing a sweeping glass-and-metal structure, designed by local architecture and engineering firm AECOM.

“My goal is simple. I want the Clippers to have the best home in all of sports,” Ballmer said in a statement accompanying the release of the renderings. “What that means to me is an unparalleled environment for players, for fans, for sponsors and for the community of Inglewood. Our goal is to build a facility that resets fans’ expectations while having a transformative impact on the city we will call home.”

Ballmer’s vision for the “best home in all of sports” includes a 26-acre complex with a sports medicine clinic, facilities for community sports groups, dining and retail spaces, a solar-panel-clad roof, indoor-outdoor “sky gardens,” team offices, and an outdoor game-viewing area with massive digital screens. Inside the arena, choices will be made to encourage what ESPN describes as a “deafening home-court advantage,” including creating a floor-to-ceiling column of stands behind the basket, with no luxury boxes or premium seating, inspired by the student seating sections at certain college arenas.

“I want it to be a noisy building,” Ballmer told ESPN. “I really want that kind of energy.”

The budget for the complex’s construction is estimated to run over a billion dollars, all of which is planned to be covered by private capital, but on land sold to the developers by the city of Inglewood. The plot is located near the forthcoming NFL stadium.

Community groups in Inglewood have expressed concern over the development, citing fears of escalating gentrification and fundamental change to the neighborhood’s character. One group, the Uplift Inglewood Coalition, is moving forward with a lawsuit against the city, alleging that their deal to sell the land for the Clippers arena violated the California state Surplus Land Act which requires public lands be offered for construction of affordable housing before any other uses. More than 80 percent of current Inglewood residents qualify for some form of subsidized housing assistance.

“In the midst of booming development–which has caused skyrocketing rents and the loss of affordable housing–it simply does not make any sense to prioritize an NBA arena over the needs of Inglewood residents without investing in the needs of residents,” Uplift Inglewood spokesperson D’artagnan Scorza wrote. “Public land should be used for the public good, and access to housing is central to building strong communities.”

A second legal albatross hangs around the arena’s construction, in the form of lawsuits filed by the owners of the nearby Forum. The Forum is owned by Madison Square Garden Co., the CEO of which is James Dolan, who happens to own his own NBA team, the New York Knicks. The league’s commissioner, Adam Silver, has stepped in to attempt to mediate the dispute, according to the Los Angeles Times.

The Clippers’ lease to play at the Staples Center ends in 2024, which puts pressure on team ownership to get construction done in time for the following season. Where the team might play in the event of a gap between the expiration of the Staples contract and the opening of the new arena has not been confirmed.

RELATED: Why the L.A. Sparks Are the Home Team You Should be Rooting For