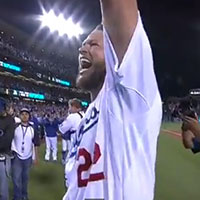 Fans were already on their feet in Dodger Stadium last night when Colorado Rockies outfielder Corey Dickerson stepped up to the plate in the bottom of the ninth. Then, with one out remaining, two-time Cy Young Award-winning pitcher Clayton Kershaw proved why exactly he’s the highest-paid pitcher in baseball history: he threw his 15th straight strikeout, clinching his first-ever no-hitter in the process. It was the 22nd no-hitter in franchise history (12th in the city of L.A.), and the second for the Dodgers this year. In a post-game interview held on the field, an emotional Kershaw told the crowd, “This is really special. To do it at home is more amazing.”