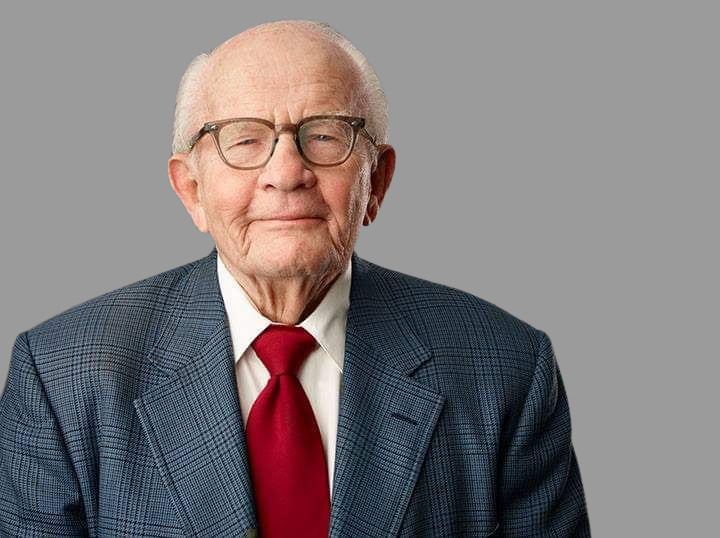 Photo: Courtesy of The Midnight Mission

Clancy Imislund, head of downtown L.A.’s Midnight Mission, has died at the age of 93. He was known for his work with residents of Skid Row, in particular, helping them access treatment for substance abuse, and was considered a leading figure in addiction recovery locally and across the country.

“We are heartbroken at the passing of our managing director and beloved friend Clancy Imislund. He has been the heart and soul of the Midnight Mission since joining the organization in 1974,” the organization wrote in a statement announcing his death. “For 46 years, he worked relentlessly helping disenfranchised people in Skid Row find a pathway to self-sufficiency.”

“Clancy Imislund was the Jonas Salk of recovery,” Ed Begley Jr, actor, activist, and friend of Imislund’s, shared. “With 12 steps (and often 12 good jokes), he could inoculate a large room, or one lonely and desperate soul with a cure that, unlike polio, didn’t last a lifetime, but one manageable a day at a time. The millions of people that he touched around the world will never be the same.”

Imislund came to his work helping others overcome addition after struggling with alcoholism. As a young man, he married, fathered four children, and became a successful advertising executive in Dallas. But that American Dream fell apart amid what a 1998 profile of Imislund in the Los Angeles Times called “a drunken haze.”

He borrowed a car, drove as far as Phoenix, and then got a bus ticket to Los Angeles. In 1958, he landed on Skid Row.

In a 2014 interview with KPCC’s Off-Ramp, Imislund described spending the night in an all-night movie theater downtown, and then being kicked out at dawn.

“They’d come in and say, ‘All right, you bums! Everybody out.” And that’s when I hit the street,'” Imislund recalled. “I ran into a guy who said, ‘Do you want to sell a pint of blood?’ And I said, ‘You bet!’ We walked up Fourth Street to a blood bank. And I did not have enough iron in my blood to sell a pint of blood, so they suggested I go to the Midnight Mission.”

He headed to the Mission for a meal, and the staff then directed him to an Alcoholics Anonymous meeting. Imislund says he stopped drinking that day–and then dedicated himself to helping others.

The Midnight Mission was first opened in 1914, by Pentecostal minister Tom Liddecoat, who served meals to the hungry after nighttime church services (the organization dropped its official connection to any religious group in 1933). When Ismislund became managing director in 1974, he was only the fifth person to hold the job in the agency’s history. He became the first to integrate AA meetings with the Mission’s on-site services, and to bring a state employment office into the building, to help the Mission’s clients find work.

In his decades on Skid Row, he has noted watching the area and its needs evolve, particularly observing a surge in the homeless population and an increase in individuals seeking treatment for drug, rather than alcohol, concerns.

Outside of the Mission, Imislund was instrumental in an Alcoholics Anonymous organization known as the Pacific Group. Some have described the weekly meetings of the Brentwood-based group as one of the largest AA meetings anywhere, though that claim is disputed. The group was known for a hardline and religion-heavy interpretation of the 12-step recovery program laid out by AA founders Bill Wilson and Bill Smith in the mid-1930s.

“Adherents insist theirs is the only true path of recovery, and demean ‘AA lite’—groups that focus merely on drinking stories and complaints,” Benjamin Aldo wrote in a 2013 article for The Fix, a website focused on the addiction treatment industry. “Those who are uncomfortable with [Pacific Group] point to the insularity of the group, the rejection of AA members lacking enthusiasm for [Pacific Group] rules, and the notion of ‘better than’ sobriety.”

Those rules included a formal dress code, regular attendance at highly structured meetings, and an expectation of devotion which some have described as approaching “cult-like.” Imislund himself was an active and central figure within the group. After meetings or weekly softball games, members of the Pacific Group would often volunteer to clean up around his home or perform other acts of service, and enjoy meals at his home.

“Clancy is an AA ‘celebrity’ for dedicating so much of his life to the community of AA and helping men and women recover,” Mike Williams wrote for the website Addiction Programs. “From my personal experience, I was able to participate in the [Pacific Group] meetings and there were never any expectations foisted upon me. […] No AA group is for everyone, but there’s a lot of thriving people in this community.”

One individual who thrived as a member of Pacific Group was the father of writer Gregory Forrest, who described his dad’s 47 years with the program in a Medium post.

“Dad struggled in and out of AA for 12 years and could not stay sober. When he found Clancy, dad received the ‘gift’ of sobriety and he ‘got it.’ Clancy’s form of sponsorship was exactly what someone as sick as my dad needed,” he wrote, recalling the Pacific Group as a kind of family, complete with holiday events and get-togethers. “Clancy and the Pacific Group have saved literally thousands of people’s lives. I’d dare say many more than he has ‘hurt.'”

He is survived by five children, a large extended family, and thousands of people who cared for him.

“Clancy was the most influential person in my life,” Midnight Mission board member Steve Watson wrote in statement announcing the death of his colleague and friend. “He taught me that it is our great honor to be able to help another human being, no matter what their pain or suffering or needs are. He helped give me a purpose for my life, and that is to help my fellow man, woman, or child.”

Several individuals in Imislund’s circle have posted on social media that his death was a result of COVID-19, though no official statement regarding his cause of death has been released.

RELATED: The Results of This Year’s Homeless Count Are Grim—and They Don’t Take the Pandemic’s Impact into Account