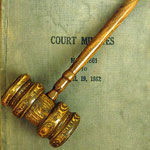 n. The occurrence of highly unusual behavior, either on behalf of jurors, a judge, attorneys, or other trial spectators in a court of law.

When the corruption trial of six city of Bell employees ended this week with chaos in the court. After verdicts for some charges were handed down Wednesday, one juror asked if it was possible to reconsider her vote. (Los Angeles County Superior Court Judge Kathleen Kennedy denied the request). The Los Angeles Times reports a second juror then sent the judge a note urging her to “remind the jury to remain respectful and not make false accusations and insults to one another,” prompting the Kennedy to draw the conclusion that “all hell has broken loose.” Legal experts told the Times the jury’s behavior was “extremely unusual.”