Home Uncategorized CityDig: ZIP it Good (Your Mail, That is) 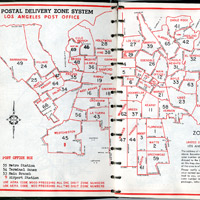 There may be multiple generations of Angelenos popping cards in the mail this holiday season, but most likely can’t recall a time when zip codes weren’t a necessary part of the addressing process. Boomers probably remember the five-digit additions taking effect in the ‘60s, but young folks may be surprised to find that postal codes go all the way back to the World War II home front.

A slew of postal employees enlisted in the months leading up to an official declaration of war resulting in a shortage of manpower and a need to streamline the service. The solution was postal codes, which were created in May of 1943, to aid in sorting the huge amounts of letters (which could reach 25 million per week—and that was just for overseas mail).

Emma Filkens, Los Angeles’ first female mail carrier, was hired in January of 1943 and was considered a novelty, paving the way for many Rosie the Riveter-types who picked up the slack in wartime America. When the U.S. officially entered the war after Pearl Harbor, women went to work at what were formerly men’s jobs all over L.A.

Mapmaker Jack Renie was once again on the case, adding special features to his fine street maps of Los Angeles County. Here he provides a guide to the 69 postal zones (not even touching the Valley) and the main stations where big mail was processed for Post Office Boxes like Terminal Annex near Union Station downtown.

While this map dates from 1950, it shows the system created in 1943 that became the basis for the Zoning Improvement Plan (or ZIP code system) that met the challenge of the huge increase in business mailings in the 1960s. For the most part, the postal codes had a nine hundred prefix stuck to them to create their modern form, so L.A. 28 became 90028.