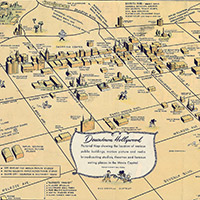 By the time this map was distributed, the concept of Hollywood as a dream machine was already firmly established in American popular culture. Even Tennessee Williams mentioned it in his play Glass Menagerie just two years before this was printed. “People go to the movies instead of moving,” says the character Tom Wingfield. “Hollywood characters are supposed to have all the adventures for everybody in America, while everybody in America sits in a dark room and watches them have them.” In the more factual sense, Hollywood actually included studios in Studio City, Burbank and Culver City along with others scattered over the metropolitan area. On this map however, we see the true geographical Hollywood as it looked in the heyday of the studio system.

A large part of that grand celebration of motion picture fantasy was the big day when the Oscars were handed out, just as they had been since 1929 (when the shindig was a private affair and Wings won best picture). If you’re looking for an explanation regarding the name of the award, you’ll find one that’s not at all up to Hollywood’s normally glamorous standards: executive director of the Academy, Margaret Herrick (namesake of the excellent, eponymous library), thought the statue looked like her uncle Oscar, and the moniker stuck.

Oscars have not always been handed out within the boundaries of this map, but there are a number of landmarks seen here that have played host to the show. The first ceremony was at the Roosevelt Hotel (seen here), and others were held at places that also appear like Grauman’s Chinese Theater (1944-1946), the Academy Award Theater (1949), the Pantages Theater (1950-1960), and recently at the Kodak (then Dolby) Theater in the Hollywood and Highland Complex that presently occupies the space above and beyond Grauman’s Chinese. As for locales not on this map, there have been galas at the Ambassador and Biltmore Hotels (alternating from 1930-1943), the Shrine Auditorium (1947-1948 and intermittently between 1988-2001), the Santa Monica Civic Auditorium (1961-1968) and the Dorothy Chandler Pavilion (also intermittently 1969-2001), which is seemingly perfect for the event.

My cartographic statuette goes to Mr. Lowell E. Jones, who created several marvelous pictorial maps around these parts but seems to have avoided the spotlight himself.