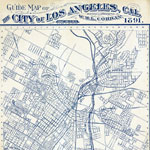 Guide Map of the City of Los Angeles in 1891 done for W.H.L. Corran by the Schmidt Label and Lithograph Company of San Francisco.

This rather Victorian looking map, which was handed out gratis at the W. First St. offices of publisher W.H.L. Corran to subscribers of Los Angeles City Directories in an effort to clear up confusion regarding the street names used in the 1890 Directory, gives a clear look at the streets of the city after the booms and busts of the 1880s. This was a Los Angeles of around 52,000 people (about the size of Cerritos or Rosemead now) with some recognizable landmarks in place including the fairly new Evergreen Cemetery in Boyle Heights, Westlake Park (then a toney resort), Bunker Hill, the future Pershing Square shown as “City Park” and assorted street rail lines including the “Los Angeles and Ostrich Farm Railroad.” Ironically the neighborhood near to USC is labeled “West Los Angeles.” The city had just re-numbered and re-named many streets, and Broadway (previously Fort) and Grand (previosly Charity) are labelled here with their new monikers. What would later beome Figueroa, however, is called Pearl here.

Los Angeles Public Library map librarian Glen Creason will share a map from the Central Library’s collection at CityThink each week. This is his first post for Los Angeles magazine.