Home Uncategorized CityDig: When UCLA Was a Downtown Teaching College 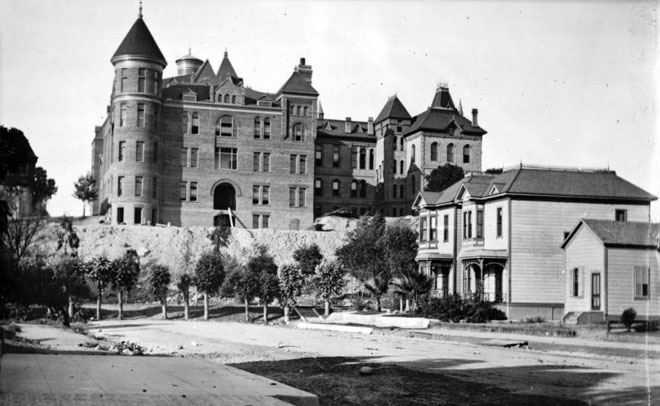 For most of us, UCLA’s presence on the city’s Westside seems as much a given as ocean breezes and congestion on the 405. But long before Westwood sprang up from the bean fields of Rancho San Jose de Buenos Ayres, the forerunner to UCLA rose from a knoll in the heart of downtown Los Angeles.

In 1882, the California Branch State Normal School began training future teachers inside an imposing five-story building, which sat atop a hill at the intersection of Grand Avenue. and Fifth Street. Tuition was free, and the three-year course of study included classes in penmanship, botany, and vocal music.

Angelenos took to calling the school’s perch Normal Hill, and soon the promontory—actually a southern extension of Bunker Hill—became a prized location in the minds of city planners. In his 1907 plan for downtown Los Angeles, City Beautiful theorist Charles Mulford Robinson envisioned a public library atop Normal Hill, which would anchor one end of a grand, Parisian-style boulevard stretching more than a mile to the Southern Pacific’s Arcade Station.

When the teaching college moved to a roomier campus on Vermont Avenue in 1914, architects, planners, and residents advanced several ideas for Normal Hill. Some called for park space from which residents would enjoy commanding views of the city. Others, like Robinson, envisioned a public edifice rising from the hill’s peak.

In the end, Normal Hill, which stubbornly blocked both Hope and Fifth streets, became a casualty of downtown’s crippling street congestion. To extend Fifth through the site, construction crews shaved off the top half of Normal Hill. The Los Angeles Central Library did eventually rise there, but the truncated hill and Fifth Street extension diminished its visual prominence.

The State Normal School, meanwhile, became part of the University of California system in 1919, and five years later acquired its familiar UCLA initials. It remained on its Vermont campus until 1929, when it became the centerpiece of the Janss Investment Corporation’s new town of Westwood.