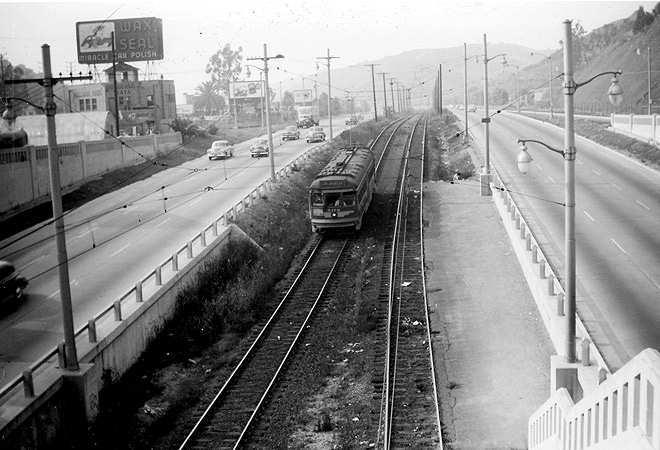 It was designed to uncork an automotive traffic bottleneck through the Hollywood Hills, but when the precursor to the 101 freeway debuted in 1940, L.A.’s transportation infrastructure was still transitioning from the railcar to the motorcar. And so when Mayor Fletcher Bowron, actor Gene Autry, and other dignitaries dedicated the Cahuenga Pass Freeway on June 15, 1940, its two frontage roads and eight concrete lanes were divided by two sets of trolley tracks. Trolleys and autos had shared the Cahuenga Pass since 1911, but today the sight of a Pacific Electric red car using a modern freeway structure—as seen above in the photo from the Metro Transportation Library and Archive—strikes the viewer as somewhat anachronistic.

The trolley tracks didn’t remain for long, though. The region’s rail transit system entered a period of rapid decline after World War II, and on December 28, 1952, buses replaced fixed rail service along the Pacific Electric’s San Fernando Valley line. The median was soon paved over and converted into additional traffic lanes. It wasn’t until 2000, after workers had tunneled through the bedrock of the Santa Monica Mountains to extend the Metro Red Line subway to Universal City, that Hollywood regained a direct rail connection with the Valley.

Above: A Pacific Electric car travels down the median of the Hollywood Freeway at Barham Blvd. in 1952. Photo by Alan Weeks, courtesy of the Metro Transportation Library and Archive.

Why the Highway Administration Is Agonizing Over Fonts