Home Uncategorized CityDig: When the City of Angels Had Its Own Wrigley Field 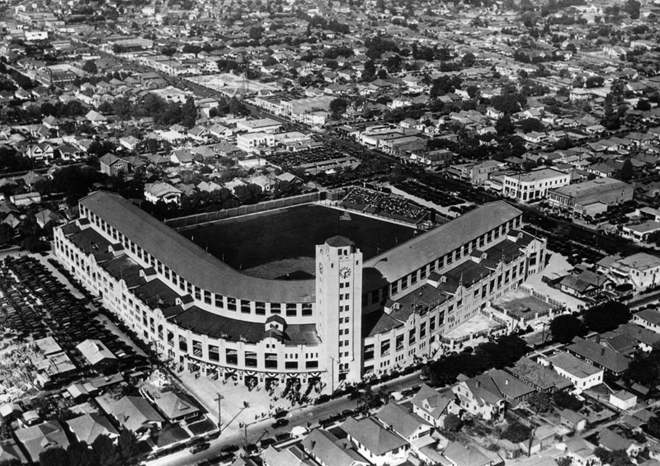 Wrigley Field: baseball fans will forever associate the name with the Windy City. But for decades the City of Angels boasted a Wrigley Field of its own—the longtime home of the minor-league Los Angeles Angels.

Los Angeles’ Wrigley Field was, in fact, the first to bear the name. Though it had been open since 1914, Cubs fans still knew the Chicago stadium as Cubs Park on September 29, 1925, when L.A.’s newest ballpark hosted its opening contest between the Los Angeles Angels and the San Francisco Seals. (L.A. won, 10-8.)

Built at the then-extravagant cost of $1.5 million, Wrigley Field was the brainchild of chewing gum magnate William Wrigley. (Wrigley also owned the Cubs and would rename the Chicago stadium for himself in 1926.) It made a strong first impression on the nation’s leading baseball magazine. Upon its opening, The Sporting News hailed the stadium as “the finest baseball edifice in the United States,” adding that “Cubs Park is an excellent one, but the Angels have a better one.”

Outside, a Spanish colonial revival clock tower rose nine stories behind home plate. Inside, the ballpark featured a covered, double-decked grandstand that wrapped from one foul line to the other. Hungry power hitters feasted on its short power alleys, which measured only 345 feet. (Dodger Stadium’s are 385.) Many of its features are visible in Kodachrome below, thanks to a home movie recently rediscovered and digitized by the Academy Film Archive.

The ballpark survived more than a decade after the Angels left in 1958, displaced by the major-league Dodgers’ arrival from Brooklyn. It appeared in several films, including Damn Yankees, as a stand-in for East Coast stadiums and in 1961 celebrated its last hurrah, when an American League expansion franchise with an old name—the Los Angeles Angels—landed there for their opening season.

RELATED: Before the Dodgers, L.A. Had the Hollywood Stars—and Gilmore Field