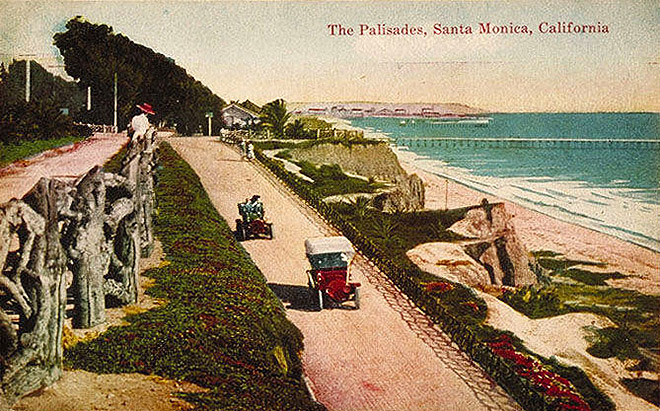 Functionally, it’s little more than a highway ramp—a 1,400-foot-long, 3-lane roadway that climbs 84 feet between Pacific Coast Highway (PCH) and Santa Monica’s Ocean Avenue. But that description hardly hints at the California Incline’s charm. Driving down the incline, the palms of Palisades Park recede into the sky as one abruptly leaves behind the urban grid of Santa Monica and enters the surf and sand (and traffic) that is the realm of PCH.

Footpaths like the Sunset Trail and stairways like the 99 Steps preceded it, but the California Incline was the first automobile shortcut over Santa Monica’s ocean bluffs. When it opened around 1905, Linda Vista Drive (as it was then called) was a dirt path carved into the cliffside. Only later was it paved and named for its intersection with California Avenue. In 1935, construction of PCH along the base of the bluffs further reconfigured the California Incline, widening the roadway adding a concrete balustrade that remains its most notable architectural detail.

Erosion has brought more change. In places where the sandstone bluffs have crumbled away, 14 concrete columns are the only thing keeping the roadway’s 8-inch slab from falling onto PCH below. That engineering solution looks picturesque from below, but Caltrans and the city of Santa Monica have deemed it unsafe. Later this year, a city project will demolish the old incline and then rebuild it to modern seismic standards.