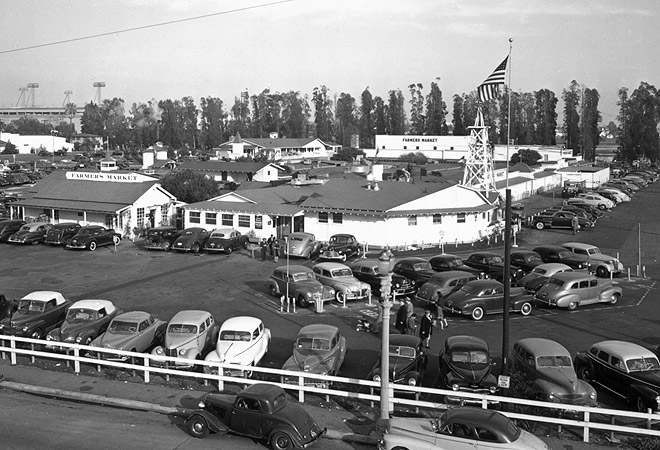 Roughly 12,000 farms dotted the plains of Los Angeles County in 1934 when 18 vendors parked their trucks at Third and Fairfax to sell their locally grown produce. Today, the farms have given way to suburban sprawl, but Los Angeles’ Original Farmers Market remains a cherished historic landmark, welcoming an estimated three million visitors each year.

The brainchild of Roger Dahlhjelm and Fred Beck, the Farmers’ Public Market (later, simply Farmers Market—no apostrophe) opened on July 14, 1934, on a five-acre lot owned by oil baron Earl Gilmore. Merchants sold meats, fruits, and vegetables grown on their own farms, many of them located in the then-rural San Fernando Valley. Restaurants and retail shops later joined the mix.

In the early years, co-founder Fred Beck promoted the Farmers Market through a daily column in the Los Angeles Times. His 2,876 articles—all paid advertisements—earned the skilled copywriter a reputation for surprising honesty. (Beck once advised readers that the day’s tomatoes were “strictly third-rate…Don’t waste your money.”) Another Times columnist, gossip reporter Hedda Hopper, transformed the Farmers Market into an international tourist destination after she began reporting celebrity sightings there in 1938.

But it was more than movie stars fondling lettuce that drew people to the stalls at Third and Fairfax. At the height of the automobile age, the Farmers Market satisfied Southern Californians’ hunger for a walkable space where chance encounters and face-to-face conversations were possible.

Fittingly, the Farmers Market gave birth to two similarly quasi-public spaces inspired by a nostalgic, pedestrian past. While dining on the Farmers Market patio, Walt Disney reportedly drafted some of the first plans for Disneyland and its Main Street, USA. Decades later, the Grove retail complex rose from the former site of the Farmers Market parking lot, where Angelenos had left behind their cars for a few moments on foot.