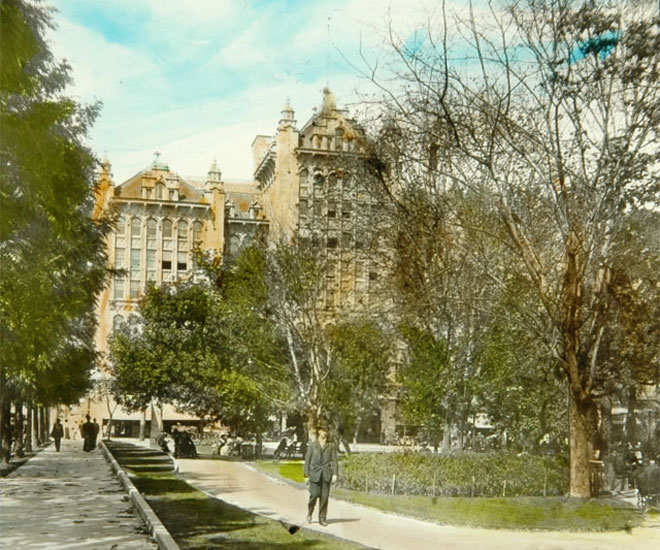 Stroll into Pershing Square today, and your eyes are more likely to focus on the purple of the 10-story campanile, the bright yellow of the vacant cafeteria, or even the brown-beige of the sprawling pavement than anything verdant. But if efforts to overhaul the square succeed, green may once again become its dominant hue, as it is in this hand-colored lantern slide from the Autry’s Braun Research Library.

Set aside in 1866 as Los Angeles’ first public park, Pershing Square has been the beneficiary—and victim—of many redesigns in its 147-year history.

The lushly landscaped park shown in this ca.1900 image reflects the design of city engineer Fred Eaton. Known then as Central Park, the five-acre site functioned as an urban oasis amid a growing city. It became an even more vibrant urban space after architect John Parkinson re-envisioned it as a formal city square in 1910, introducing a symmetrical pattern, exotic plants, and a central fountain. The square provided a platform for soapbox preachers and was a popular cruising site for gay men. Office workers and shoppers continued to flock to the park for its shaded benches and flourishing grounds.

Later redesigns, combined with the decline of the city’s central business district, changed the character of the park, which the city renamed Pershing Square in 1918. When the city added an underground parking garage in the early 1950s, it rebuilt the square to discourage the socially marginalized from congregating. Benches faced a shadeless, empty lawn where mature trees once stood. In the 1990s, Ricardo Legorreta and Laurie Olin’s redesign added monuments to the city’s multicultural heritage but failed to inject new life into the space. Today, even as downtown’s renaissance continues, many pedestrians avoid what was once in name and function L.A.’s Central Park.