Home Uncategorized CityDig: When L.A.’s Buses Had an Upper Deck 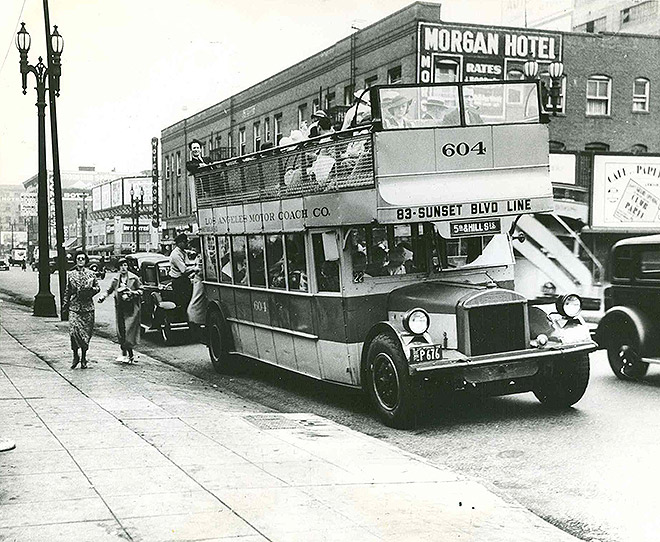 Think London meets Los Angeles. When the double-decker transit bus arrived in Los Angeles, it came with a distinctly local innovation—an open-air top deck. Up there, passengers could lean back in their wicker seats, bask in the sunlight, and watch the palm trees and Art Deco towers stream past.

The Los Angeles Motorbus Company might have encouraged such pleasure-riding, but it ordered its first batch of double-deckers in 1924 for a more prosaic reason: their extra capacity. With 54-64 seats each (depending on the model), the buses could absorb the crowds huddled around bus stops along new, booming commercial corridors like Wilshire Boulevard. That made them attractive to the bus line’s joint owners, the Pacific Electric and Los Angeles railways, who used double-deckers as an alternative to building costly new trolley lines.

And Angelenos loved them. Production companies often rented the yellow-and-red vehicles for film shoots. On summer evenings, young couples flocked to their upper decks for gentle breezes—and privacy. Bad weather did usually mean unused capacity, but the buses continued to dart down Wilshire and Sunset through the 1930s. Eventually, the popular buses went the way of the streetcars they replaced—though you can still find double-decked sightseeing buses cruising the city’s tourist districts.

Above: A double-decker bus of the Los Angeles Motor Coach Company, circa 1932. Courtesy of the Metro Transportation Library and Archive.