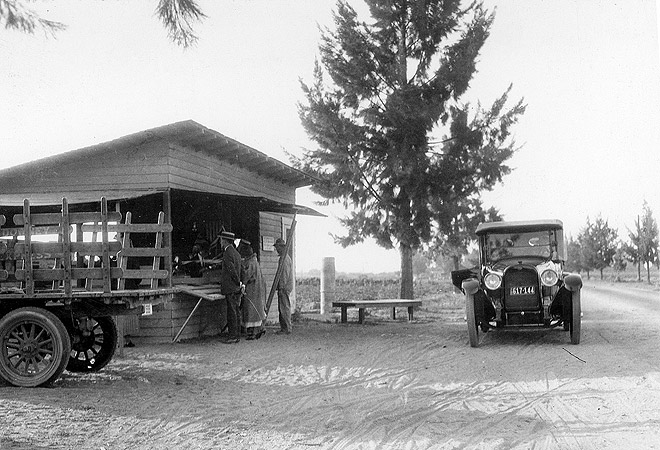 Orange County was more farmland than suburb—a landscape of orange groves and cow pastures rather than tract houses and fairytale castles—when Walter Knott opened his first roadside produce stand in 1923. The dusty highway passing through Knott’s berry farm was fast becoming the principal route between Los Angeles and the beach cities of the Orange Coast, and beach-bound motorists discovered the farmer’s humble wooden shack—located near the midpoint of their drive—as a place to momentarily escape the automobile and sample Knott’s farm-fresh berries and preserves.

As traffic increased, the enterprising farmer expanded his roadside accommodations. In 1928 Knott replaced the rustic shack with a stucco building that housed a berry market and tearoom. Later, Depression-era financial hardship forced Walter’s wife Cordelia to open Mrs. Knott’s Chicken Dinner Restaurant. Serving fried chicken and warm berry pies, the restaurant became so popular (in 1940 it averaged 4,000 chicken dinners each Sunday) that the Knotts began adding diversions to entertain the hungry crowds. A 20-foot artificial volcano belched steam from its summit. A Ghost Town Village reproduced the frontier settlements of the American West. Rides soon followed. By the time visitors started paying an admission fee in 1968, suburbia had displaced arcadia in Buena Park, and Knott’s had become a farm in name only.