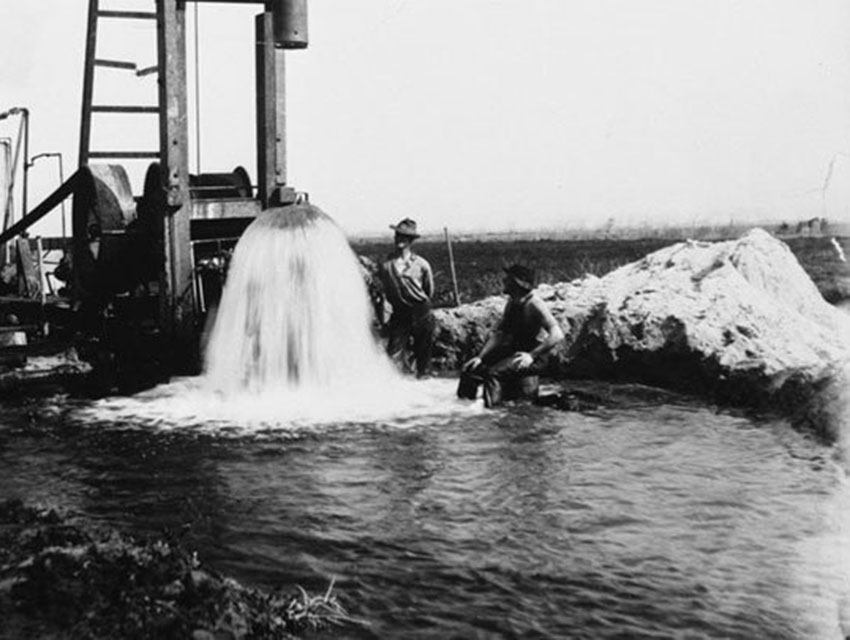 Vast underground reservoirs of water: the concept might have been hard to fathom for Angelenos in August 1868, but the evidence was clear enough. When workers employed by former Governor John Downey drilled a hole into the ground some two and a half miles west of the village of Compton, water came gushing out in a fountain four feet high. They had bored Los Angeles’ first free-flowing artesian well.

The mechanics were straightforward. When rainfall seeps into the ground, it flows just like water above the ground, moving through the porous sedimentary strata that underlie Los Angeles until it encounters something impermeable, like harder rock uplifted by an earthquake fault. Then, the water pools behind the obstruction, building up pressure. When Downey’s workers bored their hole into the ground, the water rushed through its new escape route, just as it would if you were to halt the flow of water through a garden hose and then puncture it with a needle.

Still, Yellowstone was four years away from becoming a national park, and the sight of water spouting from the ground under its own power drew curious onlookers. For a time, stagecoach drivers bound for San Pedro diverted from their route so that passengers could glimpse the hydrologic wonder.

But within a decade, the sight had become commonplace. Orange growers and farmers openly tapped the region’s groundwater to irrigate their crops, while communities exploited wells for their domestic water supply. One town named itself Artesia after the practice. By 1892, Los Angeles County was withdrawing water from the ground through 627 separate artesian wells, few of them requiring pumps. Many were capped to capture the water. Others were left uncapped, spraying jets of water into the air.

Unfortunately, there were limits to the region’s bounty. The underground aquifers represented centuries of accumulated, captured rainfall, and Los Angeles was draining them faster than they could be replenished. Within a few decades, water pressure had plummeted and the wells stopped flowing freely. Pumps replaced the natural hydrologic forces, and engineers eyed a new source of water in the distant Owens Valley.

Above: “Water gushes out of an artesian well near Long Beach, circa 1900. Courtesy of the Photo Collection – Los Angeles Public Library.”