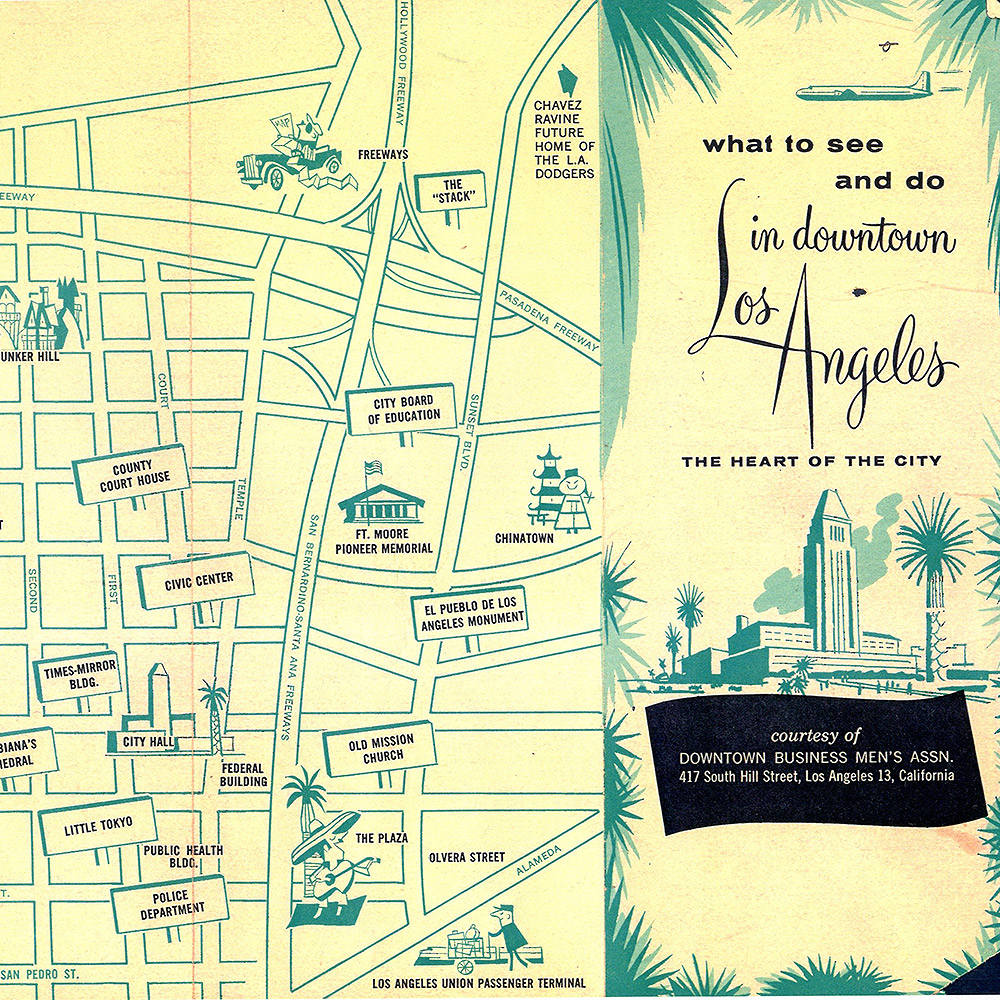 Freeway fever had passed through Los Angeles and carved great swaths out of historic downtown when this meek cartographic attempt at luring commerce to L.A. was published in the early ‘60s.

The California Freeway and Expressway System was created in 1959 and strove to connect our city to a gigantic national network of superhighways, thus completing the transformation into an automobile-centered metropolis. Such an endeavor has been the subject of great and heated debates: were the big highway eminent domain takeovers—the ones that steamrolled neighborhoods and displaced established residents—ultimately good for the people of L.A.? Many a shout was heard on the topic, but at the time of this map’s publication, DTLA was left in the doldrums (that is to say, chopped into quadrants and basically left to wither at the street level).

As Space Age-y overpasses rose up in the landscape, downtown became a ghost town.  While locals sought entertainments in places like Hollywood, Beverly Hills, Westwood, Santa Monica, Pasadena, the Valley and (gulp)…Orange County, the streets seen here became the land that time forgot, especially the historic core, which was left to decay.

The map is a mixed bag of neighborhoods and buildings slated for the wrecking ball (Bunker Hill, Philharmonic Auditorium, and the Financial Center on Spring street) alongside the well-known landmarks like Olvera Street, Chinatown, Little Tokyo and Angels Flight. Yet the booster lure of places marked here—Pershing Square, the old neglected Public Library, St. Vibiana’s Cathedral, the Fort Moore Memorial, the City Board of Education and the Police Department—don’t sing a particularly alluring siren song for adventure-seeking tourists. At this point in its history Los Angeles took on the hard-to-shake reputation of a city without a center, and downtown was just another place to zoom past, a modest skyline where City Hall was the only building standing taller than 400 feet.

Above: What to See and Do in Downtown Los Angeles, Downtown Business Men’s Association, c. 1960