Home Uncategorized CityDig: What the LAPD Leaves Behind at Parker Center 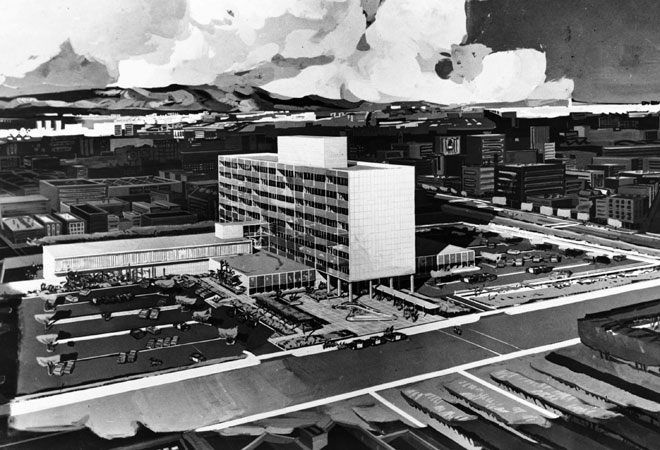 From 1955 until 2009, when most staff moved to a new administrative building a block away, the Los Angeles Police Department’s Parker Center was as a proud symbol of police modernization and a focal point for controversy. Last week Chief Charlie Beck padlocked its front doors, and the aging building now stands vacant.

When it opened in 1955, the new headquarters brought the LAPD’s traffic, central, and metropolitan divisions under one roof. The sleek design by architects Welton Becket and J. E. Stanton signaled the department’s turn, engineered by Chief William Parker, away from rampant corruption and toward the modern age of professional policing. With its labs rivaling those of the FBI, it was billed as the finest police headquarters in the world and routinely appeared in the long-running television series Dragnet. The building’s designers seemingly thought of everything—even rubber floors for the drunk tank.

But for others the building came to represent the LAPD’s controversial tactics—also associated with Parker—that engendered widespread mistrust among minority communities. After a jury acquitted four police officers in the 1991 Rodney King beating, an angry crowd gathered outside the Parker Center. Its parking kiosk was one of the first structures claimed by the ensuing riots.

Controversy was not limited to the practices promoted by the building’s occupants. When in 1955 workers uncrated “An American Family Protected By Police,” a bronze statue meant to grace the building’s main entrance, the elongated bodies and angular, featureless faces of sculptor Tony Rosenthal’s abstract figures shocked some observers. Art critics praised the sculpture, but the amateur critics on the city council hated it. One wanted it sent to the smelter. Another suggested that thieves could steal the artwork with little fear of police intervention. Ultimately, the Los Angeles art community rallied around the sculpture. It hangs today outside the Parker Center’s front doors, its future as uncertain as that of the building it adorns.