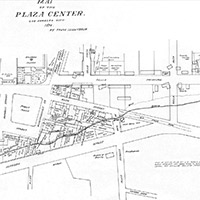 For local historians, the recent discovery of a sizeable stretch of very old brick pipe running under the digging site of the big money Blossom Plaza Project in Chinatown is a great opportunity to witness history in real time. Urban archaeologists and those who study the historical development of Los Angeles seem to agree that this is a well-preserved chunk of the Zanja Madre, or Mother Ditch that once conveyed precious H2O to the growing city.

Portions of the Zanja were found back in 2005 in the area, but this length at Blossom Plaza underneath the site of the old Little Joe’s restaurant seems to be a history wonk’s dream come true. The Zanja Madre was the very first attempt at developing the pueblo agriculturally, beginning right after the founding in 1781 with the Pobladores (first settlers) digging these water sources off the Porciuncula (Los Angeles River). The Zanja system was essential for expansion and population growth, delivering water for drinking, irrigating crops, nourishing livestock and—once in a great while—bathing.

The early Zanja Madre was a rudimentary open ditch that evolved to about twelve feet at the top and six at the bottom, with a depth of flowing water at about three feet. Since the open system left the zanjas at the mercy of the elements and human carelessness, the common council and later city council constantly tried to improve this precious source. A drought in the late 1870s increased the necessity for shoring up the ditches, and in 1877 they were converted to “high service” and lined with concrete that unfortunately did not stand up to heavy rains in 1884 and 1886. By 1886, they had completely bricked over the zanjas, creating large pipes like the one at Blossom Plaza. At the peak of this system, 93 miles of ditches delivering water to L.A. were covered.

This map is one of several made of the plaza area in the 1870s, and while not as detailed as some others, it clearly shows the path of the Zanja Madre as it passes through the old pueblo. In 1874, the Zanjas were still open and wound past High street, crossing the old stage road, on toward the infamous Bath Street, past the new covered Macy Street bridge, edging the corner of the Bath Street schoolhouse (the first teachers college) past Wine/Olvera street.

Ironically, the ditch passed Marchessault Street, named for the mayor who banked his reputation on another water delivery system that failed (leaving him to commit suicide during a city council meeting). The Zanja Madre continued along the bluff that is now above North Broadway and stretched toward the hilly regions to the west and northwest of the city. The cartographer here, Frank Lecouvreur, often created maps of ranchos for early pioneers after statehood and was the official city surveyor of 1868-9.