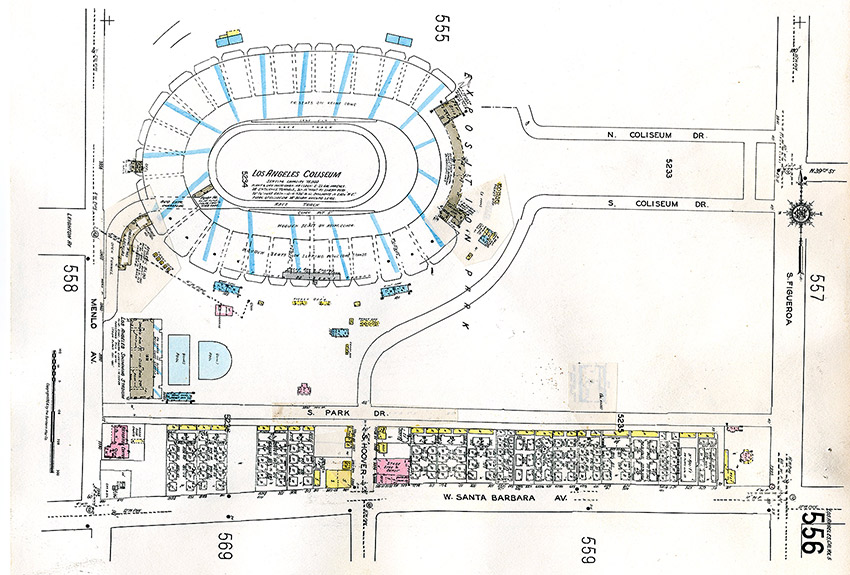 When it comes to an historic venue in Los Angeles, nothing compares to the Los Angeles Memorial Coliseum for great moments in our city’s story (click here to see map larger). The old beauty has been going strong for over 90 years and has seen it all (and then some). Originally commissioned as a memorial to the veterans of World War I, the grand stadium was designed by John and Donald Parkinson and built to last. The construction took an amazingly short 16 months and was finished on May 1, 1923 for less than one million bucks. The gridiron was christened with a football game between USC and Pomona College, and Gordon Campbell ran roughshod over the resolute Sage Hens: the Trojans dominated with a 23-7 victory on the checkerboard field. Exactly 12,836 people attended the game, though the stadium was designed to seat 75,144.

In preparation for the 1932 Olympic games, the Coliseum was enlarged to seat 101,574, with 79 rows of seats from bottom to top and two tiers of tunnels (totaling 28). At the peristyle (open) end of the Coliseum, the Olympic torch is still perched above the stadium and looks down on the playing field, which is 38-feet below ground level. In its early years the facility was called Olympic Stadium, but it eventually took on the permanent moniker of “the Coliseum” thanks largely to locals.

The Los Angeles Memorial Coliseum has hosted two Olympics, a World Series, world-class track meets, the MLB All-Star Game, the first Super Bowls, and countless memorable football games by USC, UCLA and the Los Angeles Rams of the National Football League. The venue was declared a State and Federal Historical Landmark in 1984 and boasts huge attendance records for several events, sporting or otherwise. When the Dodgers played the Red Sox in an exhibition game in 2008, the crowd of 115,300 was the largest ever to watch a baseball game. Preacher Billy Graham drew 134,254 in 1963, and the UCLA vs. USC and the Rams routinely drew over 100,000 in the years before a renovation reduced seating to 93,000.

The Coliseum has also hosted huge events in a myriad of endeavors: Pope John Paul II conducted mass there in 1987, and John F. Kennedy made his presidential acceptance speech for the 1960 Democratic convention speaking first about the New Frontier. The field has been transmogrified to suit motocross, Boxing championships, Wrestlemania, the daredevilry of Evil Kneival, and plenty of futbol—not football—including the Lingerie Bowl. As far as music goes, it is where the Rolling Stones, Janis Joplin, Metallica, the Who, Springsteen and even this year’s LA K-Pop Festival graced the airwaves.