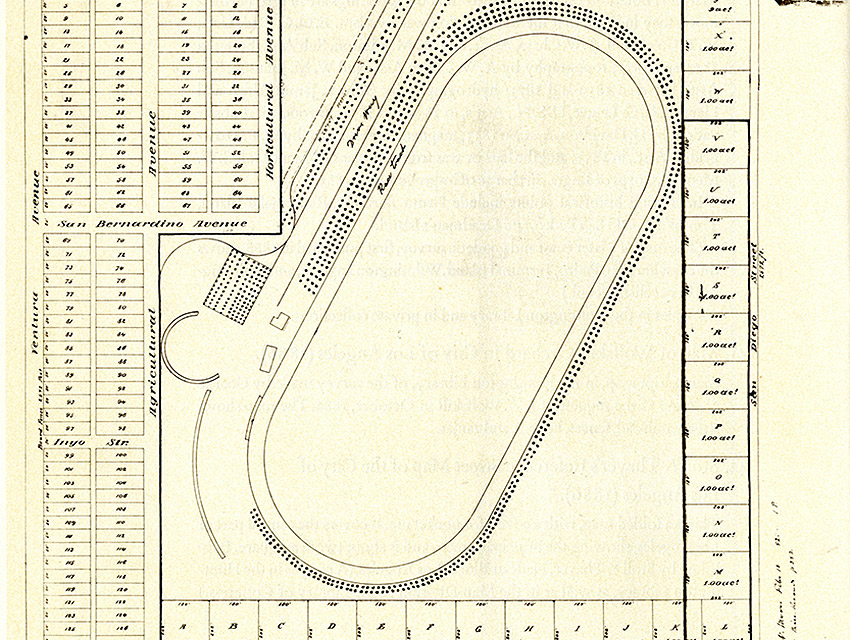 Those of us who sit and yell at television sets in keeping with the rite of a college football obsession will sadly see it all come to an end this Monday. The final collegiate gridiron jousting, however, brings up two questions: How the great game of football began in Los Angeles, and where did the red-faced fans of early L.A. travel to see their heroes beat the hell out of each other over an inflated pig-bladder?

Of course, we must turn to a map created shortly before the first pigskin was officially punted on the grass of our city. Being that ours is a land of sunshine and gentle weather, sports have always been very popular here, from the Tongva Indians playing haraicuar (rolling rings used as lance targets) to the rodeos of the rancheros. Early Angelenos excelled as horsemen and users of the lariat, so horse racing and equestrian arts were the first activities made into contests (complete with fanatical spectators) that took place in the open meadows of early Los Angeles.

The relatively young sport of football gained popularity here in the 1880s. In the summer of 1888, the then-USC Methodists played a “match-game” against the amateur Alliance Club team at Agricultural Park. By 1890, there were at least four club football teams in L.A., and by 1893, there was an actual athletic association that included USC, Oxy, Pomona and Chaffey colleges. Despite being the only high school in L.A. until 1905, Los Angeles High had a football team as early as 1894. The first Rose Bowl game was played in 1902 at Tournament Park in Pasadena and resumed in 1916 after a 14-year hiatus, a span during when many colleges favored rugby.

The Agricultural Park seen on this map goes back to 1872, when the Southern District Agricultural Society purchased this 160-acre tract outside the city limits to use as a Fair Grounds. The plan was to exhibit the wheat, corn, and oranges grown locally and eventually to stage contests that might involve a wager or two. Apparently business was not great, and by 1879, the Fair Grounds went belly-up.The area drifted toward perdition, with gambling and prostitution becoming commonplace along the avenues surrounding the park.

Sports continued to thrive, however, including bicycle and later auto racing, but each was plagued by the gambling and accompanying vice that took place around the grandstand at Agricultural park. That said, the grounds were also a playground for common folk, and the lots delineated on the map were for residences ringing the racecourse. On July 4, 1888, Agricultural Park presented contests in pole-vaulting, quoiting, 100-yard dashes, football kicking, shot-putting, and a two-mile bicycle race. Due to constant complaints from neighbors, including those Methodists at USC, the city annexed the park in 1899, and by 1908 the state took over. The space was finally reopened as Exposition Park on November 6, 1913.

As football continued to rise in popularity across the U.S., the Rose Bowl was opened in October of 1922 and the Los Angeles Coliseum was completed in the following year. Agricultural Park lived on as Exposition Park, where the old traditions of sports, gambling, and strong spirits continue even to this day.