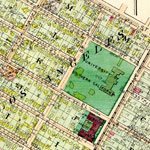 It is ironic that the University of Southern California appears as part of West Los Angeles on this plate from a Baist real estate atlas dated at the beginning of the Roaring Twenties. Despite considering the Westside behind enemy lines in recent history, the area now called University Park District was then known as West Los Angeles. USC in 1921 was still young; it had been just over thirty years since it welcomed its first graduating class (of three students) and just nine since its teams had been called “the Fighting Methodists.” The map shows a small campus between 34th and 35th streets boxed in by Hoover and University with just *eight visible buildings. It’s possible that Bovard Hall, which was built in 1921, is one of the structures and that the large College of Liberal Arts is part of this group. At the time Trojan football team (they had been renamed by a sports reporter nine years earlier) was 10 and 0. Their victories came over stalwarts like Caltech, Whittier, Oregon Agricultural, Occidental and the U.S.S. Arizona. Big, bad Notre Dame was still in Indiana and five years away from the first game of their rivalry. The two-year-old University of California Southern Branch, which would later move to Westwood and become U.C.L.A., was nearby on Vermont Ave.

Baist Atlases were done for Los Angeles in 1910, 1912, 1914, 1921, and 1923, showing important details on streets, the quality of structures, street-rail lines, water mains, section lines, and even identifying tracts by name. They have become a precious resource for local history nerds and even dogged genealogists. Baist atlases also present a wider scope than most Fire Insurance atlases and typically show sixteen streets per sheet which many times captures an entire neighborhood.