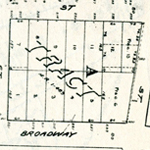 The story of Bunker Hill in Los Angeles is short, sweet, and somewhat sad, since very little of the once majestic place remains on the landscape. The only place to find Bunker Hill nowadays is in evocative, archival photographs, several fine books, and the cartography of early Los Angeles. This tract atlas sheet takes a peek at just a corner of a much larger development and ignores its most obvious feature, the elevation of the neighborhood that once rose more than a hundred feet above the city. The place was planned out by Prudent Beaudry, who purchased 20 acres for around 50 bucks and set out to create a kind of suburban escape from the streets of the bustling city below. He created roads and provided an ingenious water supply from a reservoir down below. The population and housing boom of the 1880s found Bunker Hill thriving, and a decade later grand mansions commanded wonderful 360-degree views of the basin. The Hill was the toniest neighborhood in town. In 1901 the funicular railway Angel’s Flight provided an easy trip to the top and Court Flight was added in 1904 to mitigate the difficulties of reaching the elevation.

While this map was created at the close of World War I, it includes designations for the area covered by the original Ord Survey of 1849, the Beaudry Tract of 1868, and the Mott Tract from 1868 (land granted to the Los Angeles Canal and Reservoir Company for their service to the city in creating Reservoir Number 4 at Echo Park). This map represents some of the places that made Bunker Hill magical. Angels Flight would pass up the two blocks from Hill to Olive on 3rd right next to the tunnel shown here. The Sunshine Apartments and the Hotel Astoria stood nearby, and the symbol of the area’s opulence, the Melrose Hotel, would have been at 2nd and Grand. Court Flight ran up Court Street from Broadway, passing by the magnificent Bradbury Mansion on Hill Street. Large private homes designed in several grand architectural styles lined the avenues shown here. At this point Bunker Hill was still a fine residential neighborhood, but its days were numbered; The literal and figurative degradation of the place was done by the 1940s.