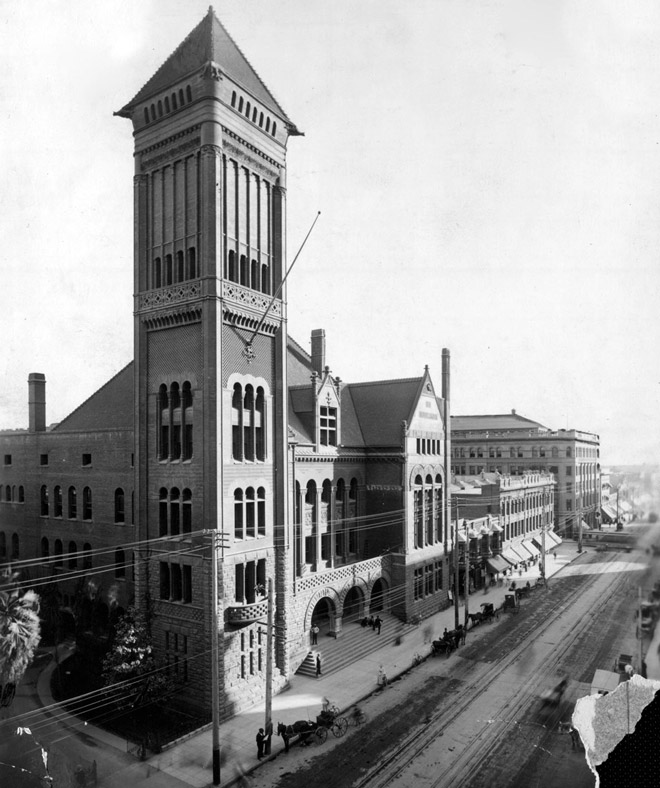 Before Los Angeles’ municipal government moved into the imposing, neoclassical skyscraper we now know as City Hall in 1928, it was content with the more modest, three-story structure seen above. Located on the east side of Broadway between Second and Third streets, this older city hall—the third building to claim the title—was the pride of Los Angeles when it opened in 1889. Clad in red and brown brick with stone ornamentation, the Romanesque building announced itself from afar with its 150-foot campanile. Inside, modern conveniences like electric incandescent light bulbs mingled with more traditional refinements like Georgian marble and oak furniture.

The Los Angeles Times hailed the building—designed by local architect S. I. Haas—as “an honor to the commonwealth,” writing that it compared favorably with the civic structures of such peer cities as Albany, New York, and Pittsburgh, Pennsylvania. But Los Angeles eventually outgrew its third city hall. Soon after the organs of government finished moving to their new headquarters in 1928, the city hired a contractor to demolish the old brick structure. A parking lot took its place.

Above: From 1889 to 1929, Los Angeles’ third city hall stood on the east side of Broadway on a site occupied today by the Los Angeles Times parking garage. Courtesy of the USC Libraries – Los Angeles Examiner Collection.