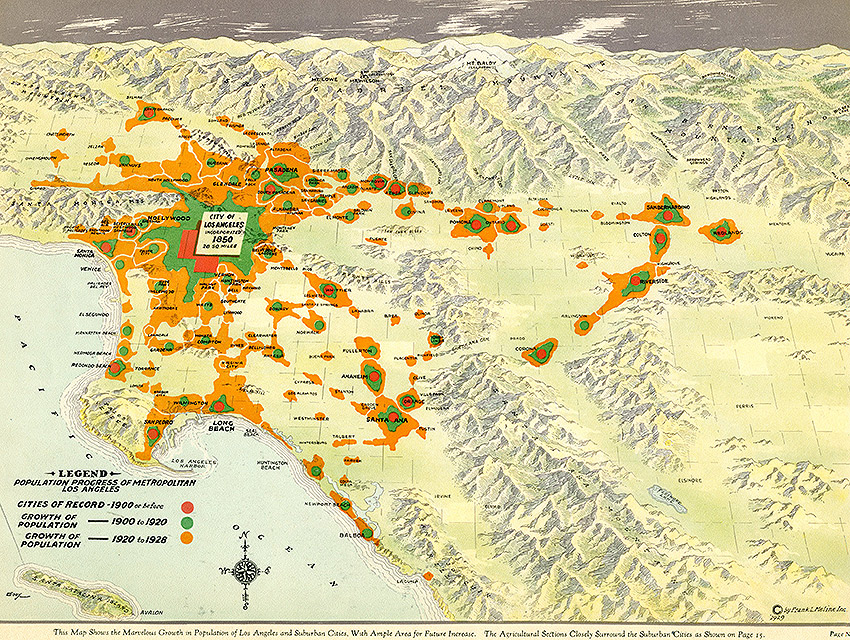 This pictorial map by the virtuoso Gerald A. Eddy demonstrates the phenomenal growth of what we now call the Los Angeles metropolitan area. The cartographical depiction begins at the city’s incorporation 165 years ago (as of last Saturday, April 4). Eddy makes geography simple by using only three colors, but don’t be fooled by the seemingly simplistic triumvirate of crayon box hues: each shade tells many tales.

The red areas show the old cities formed before the turn of the 20th century and give an idea of just how scattered settlements were in the days when the ranchos crumbled away and suburbs took their place. Even before street rail connected smaller cities to L.A., many found their own identity, like Pasadena (1886), Santa Monica (1886), San Bernardino (1869), Anaheim (1876), Redondo Beach (1892), Long Beach (1897), and South Pasadena (1888). At the center is the old City of Los Angeles, which was actually incorporated five months before statehood (April 4, 1850) as part of the settlement of the Treaty of Guadalupe Hidalgo that ended the Mexican-American War. Just 1,610 Angelenos populated the 28-square-miles of the city proper then, but that would not last long as more and more folks heard about the sweet Southern California scene. With railroads delivering newcomers equipped with big dreams and cold cash, the city swelled to 4,385 by 1860. Over the next ten years the population grew to 5,728 and doubled again in the next decade. A boom in the 1880s caused our Eden out west to balloon up to a whopping 50,000 inhabitants, which doubled again by the turn of the twentieth century. It was then that the little pueblo of Los Angeles became the 36th biggest city in America.

The smattering of green patches here show the city’s continuing growth through World War I, with the oil business, the film industry, and the advent of automobiles injecting money and economic ambition into the spread of L.A. By 1910 we were the 17th largest city in the country with a population of 319,198. We promptly zoomed over 576,000 as the roaring ‘20s dawned, barreling toward one million with the throttle stuck at full-out as illustrated by the orange colors on Eddy’s map.

Once more the unbridled spread of Los Angeles city can be seen stretching out just as the rail lines of the Pacific Electric railway spread over the San Fernando Valley, grabbing Owensmouth, Girard and Zelzah, down the shoestring to the harbor in San Pedro, through Hollywood, and west to Brentwood and Bel Air. The map stops in 1928 since the booster-book containing it was published just before Black Tuesday in October of 1929.

But even those dark days could not slow the growth of Los Angeles, who eventually became the first county in the U.S. to surpass 10 million residents—many of whom seemed to be in front of me this year on Opening Day at Dodger stadium.