Home Uncategorized CityDig: You Think You Know MacArthur Park, But You Have No Idea 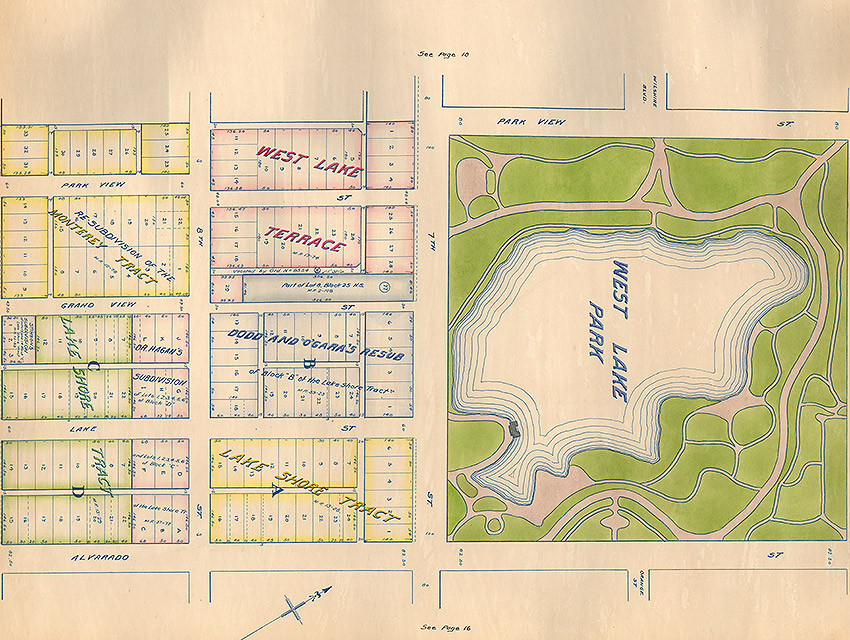 Few spots in Los Angeles have experienced the tumultuous ups and downs of MacArthur Park, formerly West Lake Park, which once posed prettily on the outskirts of the city during the boom-times of L.A.’s own gilded age.

As the Old Pueblo began to expand upon achieving statehood, the city fathers were compelled to start selling off land around the established center, including the far-off northwest (where an old alkali lake had spawned wetlands). It was unseemly to men, yes, but very nice for waterfowl, though that particular piece of real estate became even less marketable when the drought of 1862 parched the marshy parcel. Selfish locals used the low ground for dumping off all manner of trash, and neighbors took to calling the area “the Dead Sea.”

Despite an asking price of .25 cents per acre, the lots around West Lake were about as desirable as lakefront property at the Salton Sea. When the city first put the property up with other donation lots in 1865, there were no takers. But you can never count out some of the bolder L.A. developers like E.A. Forrester and Mayor William Workman, both of whom owned some bargain acreage in the area. With some political juice and, of course, a bit of cash, Workman managed to have the swampy land declared a city park in April of 1886. What’s more, with clean water piped in from the Los Angeles River along with the planting of native shrubs and trees, the old dump site bloomed and opened as an impressive public park on November 23, 1890.

The place was an immediate hit, drawing folks from all over the basin for boating in the lake, picnicking on the grounds, riding in horse-drawn buggies, and strolling the park’s perimeter in fashionable attire. The newspapers described it as “a little gem” where one might promenade along “winding paths, pretty, velvety grass plats and beds of flowers while shrubs and well-chosen shade trees are planted here and there…” By 1895 there was a bandstand where one could hear tunes from the opera The Mikado or a Johann Strauss II waltz like “Wine, Women and Song.” Two streetcar lines connected the park to the rest of the city, and deluxe hotels were built facing the beautiful lake. Suddenly, the raggedy days of the old bog were ancient history, replaced by the rich spoils of the trendy neighborhood seen on the above map (featuring impressive homes built by well-off Angelenos along with the tony Westlake School for Girls, the Denishawn Ballet School, and the Park Congregation Church).

At the time of this map’s creation, World War I was coming to a close and prosperity was at hand as the new 2nd Street tunnel was opening the entire city up to free-flowing traffic. But regardless of changes like extending Wilshire boulevard right through the titular lake of West Lake Park, renaming the grounds McArthur Park in 1942, and bringing the terrific Langer’s Delicatessen to South Alvarado, all good things must come to an end: As the decades passed, the once magnificent lake suffered from neglect, and the neighborhood took a turn for the worse. In the 1980s, illegal activity in the area increased at an alarming rate, and the lake became terribly contaminated. Attempts to clean up the water, control the crime, and revitalize the area in 1993 and again in 2004 were small steps in the right direction. Further hope arrived with the subway Red-Purple line, which re-connected old Westlake with greater L.A. again.