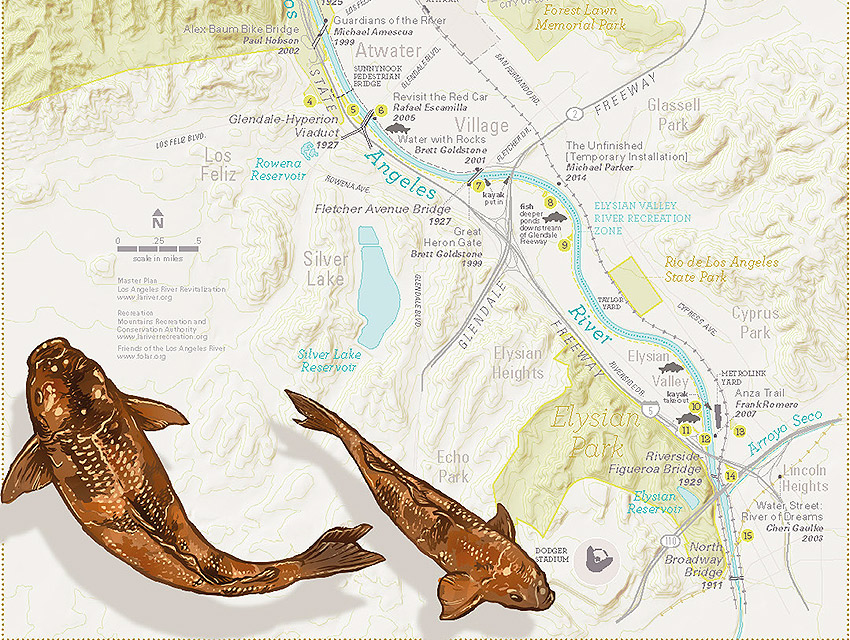 It would be difficult to find a more potent combination of passion and fascination for me than the recently released book LAtitudes: An Angeleno’s Atlas (Heyday, April 15). Through new maps that illuminate both the stories of our city and the revitalized art of cartography, this compendium—for which, I must confess, I wrote the introduction—expresses the soul and spirit of Los Angeles. The long-anticipated collection of essays and maps, expertly woven together by editor Patricia Wakida, is a feast for lovers of Los Angeles and, yes, map aficionados. There are nineteen essays to savor and an equal number of cartograms by the amazingly creative David Deis, all of which turn my own weekly process here of illuminating historical maps with a few paragraphs on its head: In the case of LAtitudes, it is the maps that are created from scratch to accompany stories told by local writers. Those writers express life on the ground in Los Angeles, the hopes, dreams, and sometimes frustrations of the beating heart of this complex and confounding metropolis. The tales told here reach back to the Tongva settlements thousands of years ago and give insight into today’s rambunctious L.A., which seems to change by the hour. These are intimate and inspiring journeys that, for the most part, shine a sweet light on our city’s delightfully multi-cultural landscape. Sometimes, though, they hurt a little, daring to ask questions that ought to be asked in Ferguson or Baltimore or Washington D.C.

It is impossible to break this book into pieces—it needs to be read through to get a whole view of the city’s tremendous variations on a theme. The various essays flow from Rosten Woo’s thought-provoking explanations of L.A.’s myriad neighborhoods to Michael Jaime–Becerra’s delicious piece titled Speakeasy Tacos, which strums the heartstrings. That said, I will subsequently ignore my own advice and break from our regular format to present a sampler of these maps, ones that range from geographically accurate to purely abstract depending on the mood of the essay. Deis was presented with a puzzle as large as the original pueblo’s foursquare leagues but seems to have handled it like Vin Scully calls a ballgame. Here are five standouts. The map demonstrates the robust presence of the early Native American tribe, the Tongva, who spread peacefully across the Southland and eventually met the fate of most indigenous tribes in America. The map shows the central village of Yaangna, traces the role of both the rivers and the sea in the Tongva’s cultural life, and details the relationship the original dwellers had with the sacred land and water. The place names of the Tongva villages are, appropriately, much more prominent than the missions where the tribe suffered indignities.

The Cycleway, by Dan Koeppel This little cartographic might-have-been represents the fanciful dreams of those who came out West to try something new and daring. Koeppel studied the current landscape and followed (old map in hand) what would have been the grand plan of Horace M. Dobbins: a wooden bicycle freeway from Pasadena all the way downtown. There isn’t an adventurer in L.A. who, when reading this piece and seeing this map, doesn’t wish he or she could take a spin on those boards. Through this one story and map we get a feel for the alternative, the eccentric, and the independent spirit of a sometimes-strange Los Angeles. This more intimate carte expresses something most people take for granted in the big city—even as one of the most impressive shows of Los Angeles’ natural beauty stand tall around them. Hood asks Angelenos to lift their brows and take in the urban forests of L.A., which, like the human genealogy of this city, come from all parts of the world. From the magnificent Sycamores of centuries ago to the ubiquitous California Pepper Trees, the impossible-to-ignore Jacarandas, the glorious Moreton Bay Fig Trees and the humble but beautiful Olive, the Crape Myrtle, and (of course) all manner of palm trees, we are uplifted by our own wondrous landscape. The greatly underappreciated and mostly misunderstood Los Angeles River is the centerpiece of this map, which deflates a myth or two and reaffirms a local desire to reclaim what is wild and beautiful about this surprising spring. In just 52 miles, Wilcox points out the magic along the shores of the waters once “entombed in concrete” by the Federal Engineers. And yes, there is fishing and carp that thrive in places along the winding way with fishermen so dedicated you’d think the author is writing about Idaho or Montana.

A View from the Air, by Lynell George This is less a map than it is a rendering of all of Los Angeles’ aural landmarks. Lynell George’s evocative and affectionate piece takes you to one common “happy place” where kids listened to Vin Scully with a transistor under their pillow or teens danced to R&B on KGFJ during the “Summer of Motown” or young rebels found their voice in the broadcasts of Rodney Bingenheimer. The initials KFWB, KRLA, KMET, KCRW sing of sweet memories, but the folkish wisdom and hope they brought went a long way towards making Los Angeles the city it is today.