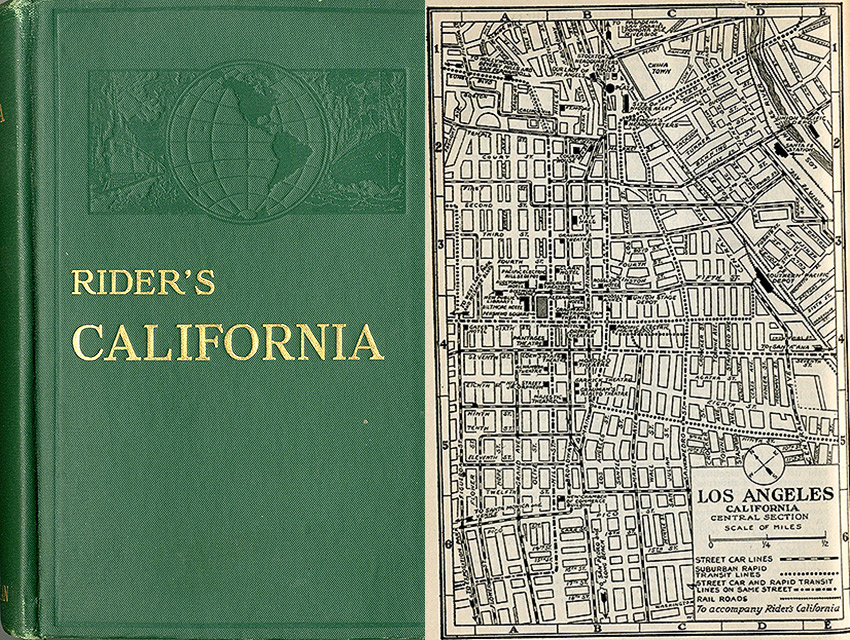 Once again we revisit Rider’s guide for a trip to Los Angeles in the roaring twenties (click here to see the map larger). Money was flowing, and L.A. was blooming and booming. If you were a young sophisticate visiting Los Angeles looking to experience the culture of a growing city, you would have been remiss to avoid the downtown theater district seen here. You might have jumped off the train at the Santa Fe Station, grabbing a streetcar heading west toward 6th and Broadway, where more than a dozen playhouses and theater palaces awaited each with all manor of entertainment. Or you could have hopped off a bus at the Union Stage depot and strolled over to the hotels dotting the map, here including the Alexandria, the Biltmore, the Clark or the Rosslyn.

There was a lot of variety in these streets in 1925, and as live musical comedy faded, films were starting to become the popular pasttime of Angelenos. Visitors and locals could go low or highbrow in the downtown area: At the gorgeous Grauman’s Million Dollar Theater (listed here just as Grauman’s Theater), you could have see Cecil B. DeMille’s blockbuster The Ten Commandments; the Metropolitan offered lighter fare with Harold Lloyd’s The Freshman or Fred Waring’s Pennsylvanians playing “Collegiate,” which was Pharrell’s “Happy” of the day. The more modest Grauman’s Rialto offered Rugged Water, the thrilling tale of the Cape Cod life-saving service that starred Wallace Beery (who, in his day, seems to have been in as many films per year as James Franco is now). Live theater was still flourishing at places like the Morosco, where miss Charlotte Treadway hit the stage as “an elfish chorus girl” in Kiki. Within a year the Morosco became the President, morphing into a newsreel theater around 1930.

For more uplifting cultural outings there was the Philharmonic Auditorium, where the Los Angeles Oratorio Society performed Handel’s “Messiah” during the holiday season and the San Carlo Grand Opera announced their 1925 season that featured “Tosca,” “Rigoletto,” “Faust,” “Aida,” “Carmen,” “Thais,” and “Lohengrin” (to bring some Teutonic flavor the opera stage). The Biltmore, a brand new theater that announced they would be “playing only to first-class New York attractions,” staged the classic Sheridan farce The Rivals and later on The Student Prince, which packed the house. The beautiful Orpheum still featured unusual acts like Kitty Doner, the male impersonator on the same bill with recently retired boxing legend Benny Leonard. The Playhouse was showing What Price Glory, which they strangely advertised as “a war comedy.” Other theaters on the map here tried all kinds of shows, including Loew’s State’s production of Her Sister from Paris, which starred silent film starlet Constance Talmadge.

While Rider’s guide kept it simple, they did include the Los Angeles Railway streetcar lines, the suburban rapid transit lines (buses), the railroad stations, the old Chinatown (on the site of today’s Union Station), and a rather odd selection of public buildings and landmarks—over at 5th and Hope, you can even see what was then the soon-to-be Central Library.