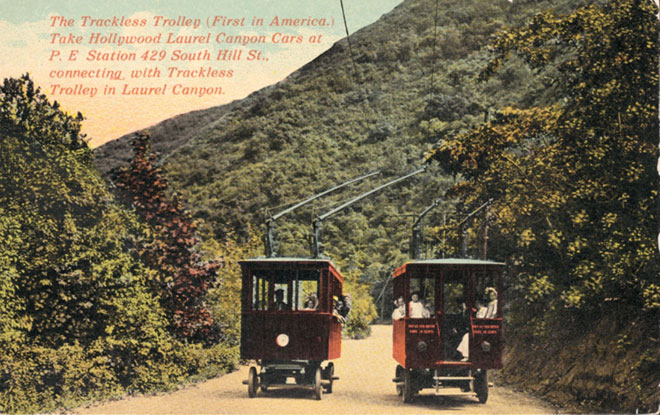 Los Angeles later earned its reputation as a car city, but in the early 20th century it was a laboratory for innovative transportation technologies. Inventors and developers tinkered with new ways to move people around the city: an elevated bicycle freeway in Pasadena, a funicular in Bunker Hill, a propeller-driven monorail in Burbank.

In the hills above Hollywood, trackless trolleys brought real estate development to Laurel Canyon. The rubber-tire trolleys—the first of their kind in the United States—whisked curious sightseers and prospective land buyers up a steep, winding route to the freshly subdivided Bungalow Land. They were an essential part of developer Charles Spencer Mann’s sales pitch, promising easy access up a grade that challenged the primitive automobile engines of the time.

Combining the superior traction of rubber automobile tires with the reliability of electric streetcar motors, the trackless trolleys drew their motive power from a pair of overhead catenary wires. The vehicles themselves, which seated 16, were actually converted Oldsmobile buses, their gasoline engines swapped out for a pair of 15-horsepower Westinghouse streetcar motors.

Service began on September 2, 1910. At the canyon’s mouth at Sunset Boulevard, passengers could transfer from a Pacific Electric streetcar and then, for a ten cent-fare, ride the 1.5-mile route along Laurel Canyon Boulevard to Lookout Mountain Avenue. Eventually, steady use wore down the hybrid vehicles. In 1915, Mann replaced them with Stanley Steamers—steam powered-buses that could easily negotiate the mountain road’s grades. The overhead wires came down, and Laurel Canyon’s brief experimentation with the trackless trolley was over.