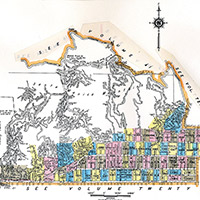 Of all the myths and legends of Hollywood, there is one mile-and-a-half stretch of boulevard whose lore surpasses them all: the Sunset Strip.

This cartographic time capsule only captures a small part of the Sunset Strip that bloomed and boomed at the end of the Prohibition era. For sundry reasons, the portion of Sunset Boulevard between old Hollywood and ritzy Beverly Hills became a prime spot for restaurants, nightclubs and posh dwellings that were the envy of the hedonistic world. The place was the destination for movie stars, big-time writers, entertainers, and all manner of hangers-on (who provided excellent people-watching at the bacchanals that took place at all hours of the day and night).

The fun began even before the repeal of the Volstead Act (1919), but when Hollywood became an economic powerhouse, the Trocadero (8610), the Mocambo (8588) and Ciro’s (8433) were where the glitterati mingled and the money flowed like water from the L.A. Aqueduct. The very adventurous might head for backroom games of chance at the Melody Room (8852), where you might’ve been sure to mind your manners since gangsters like Mickey Cohen and Bugsy Siegel made it their home away from home. Fans of Bebop might’ve stopped into the Club Renaissance (8424), where Coltrane often blew his horn. The post-war gush of free-expression may have begun to abate byt the mid 1950s, but the playgrounds of the rich and famous are still on the map: On sheet 1040, at the east end of the Strip, we can see the Garden of Allah (8152), the hotel and resort (complete with swimming pool in the shape of the Caspian sea in the center of 25 deluxe bungalows) that was once the lavish estate of silent film star Alla Nazimova. The number of celebrities that stayed on at the Garden is mind-boggling, but some include F. Scott Fitzgerald, George F. Kaufman, Humprhey Bogart, Gary Cooper, Greta Garbo, Lillian Hellman, Groucho Marx, Clifford Odets, Dorothy Parker, Sergei Rachmaninoff, Frank Sinatra and Orson Welles.

Right up the street at 8024 is the famed Schwab’s Drugstore (here marked as a restaurant) opened in 1932, where local film folk gathered to see and be seen. Big stars like Judy Garland, Mickey Rooney, Charlie Chaplin and Marilyn Monroe literally rubbed shoulders with the many who were called but not chosen in Hollywood.

By the ‘60s, the glamour began to fade and the dazzling nightclub entertainment shifted toward the big casinos in Las Vegas. Not to be outdone, the Strip made a countercultural comeback: It soon became known as the home of L.A.’s burgeoning music institutions as well as various gentleman’s clubs, as evidenced by the Largo (9009) and the Playboy Club (8560). The Whiskey a Go Go (8901), Gazzarri’s (9039), a reinvented psychedelic Ciro’s, Pandora’s Box (8118 on sheet 1040) and “The Trip” (8572) offered rock ‘n’ roll for the hip (and eye candy for the lookie loos from suburbia).

In the ‘70s, the hippies moved on (to Santa Cruz?), but the music stayed at places like the Roxy (9009), the Rainbow Room (9015), or Rodney Bingenheimer’s English Disco (8171). The Strip changed again in the 1980s as heavy metal and glam n’ glitter faded away and punk took over. As for what’s going on these days, I can’t speak to it seeing as I am never able to find a parking space.