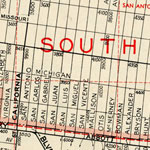 South Gate may not be the focal point of Los Angeles history but it is a perfect example of the post-war boom that offered the Depression generation a genuine middle-class take on the American Dream. Situated in southeast L.A. County, less than ten miles from downtown and close to Long Beach and Pasadena, South Gate became an attractive suburb for the working-class folks who flocked to the southland after World War II. Major factories including Firestone Tire and Rubber, General Motors, Weiser Lock, and Jorgenson Steel ringed the city. This industry and nearby Vernon offered plenty of employment opportunities for those settling in the homes being built in the area originally billed “South Gate Gardens—Gateway to the Sea.” In colonial times, the place was part of Rancho San Antonio, which was granted to Don Antonio Maria Lugo by the Spanish crown. Through the early years of American rule the land was used mostly for cattle grazing and some agriculture, including fruit orchards, barley, beans, cauliflower and dairy farming. R.D. Tweedy was an early pioneer rancher and the main drag took on his name, transforming into “the Tweedy Mile.” There, on the South Gate of the ranch, great cattle drives and social gatherings took place. Eventually realtors like Charles B. Hooper saw potential in the area and started offering half acre lots at auction—even before any streets or infrastructure were built. The idea seemed like a good one when Hooper sold $25,000 worth on the first day. The incorporated city of South Gate had begun in the post World War I era but growth was moderate due to the depression. After World War II and the influx of many veterans using the GI Bill, the population boomed to over 50,000.

This map shows off the pride of the city, the 100-acre South Gate Park with recreation facilities that included baseball, swimming, picnicking, tennis, shuffleboard, and even a deluxe horse-shoe pitching area that was the site of the sport’s world championship throughout the 1950s and ‘60s. It also shows the older High School (finished in 1930) and recent projects; the new Junior High (completed in 1941), City Hall (built in 1942) and a fine library that completed as part of the WPA. South Gate was one of the legendary blue-collar suburbs where working families could own homes, automobiles and even send their kids to parochial school if they so desired. While the city has been a rather sleepy community since this map was produced, it has been home to a few well-known citizens, including Amelia Earhart, who practiced flying on the open fields at the edge of the town, National Football League commissioner Pete Rozelle, comedian Mort Sahl, Nobel Prize winner Glenn Seaborg, and yours truly.