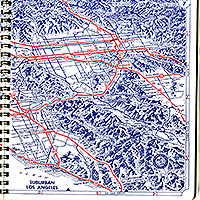 Once again, master pictorial cartographer Gerald A. Eddy takes a mundane task and turns it into a work of map art. This sketch in the Sportsman’s edition of the Farmers Insurance PockeTrip California touring guide demonstrates the dramatic setting of greater Los Angeles and the beginnings of the freeway age (shudder) all on two sport coat pocket-sized pages.

The map shows the half-dozen freeways and other principal highways stretching from Sylmar all the way up to Big Bear Lake and from San Juan Capistrano along the coast to Topanga canyon (passing the soon-to-be Surf City along the way). The guide also gives tips on how to carefully negotiate the new four-level interchange in downtown where the Pasadena, Hollywood and Santa Ana freeways meet. Gaining recreational significance here is the city of Anaheim off the 101 (then Santa Ana freeway), where Disneyland opened on July 17, 1955 (the same year this map was made).

As with all of Eddy’s masterful mapmaking, the unique topography of the area comes to life with the Transverse and Peninsular ranges including San Bernardino, San Gabriel, Santa Monica and some 90 other smaller ranges in the region represented. He manages to include canyons, reservoirs and mountain peaks ranging from mighty San Gorgonio at 11,503 feet to the gentle rise above Beverly Hills (at a meager 259 feet). The map ignores waterways like the Los Angeles and Rio Hondo rivers, but it’s possible that the lack of fish in said waterways may have led to this omission: we must remember, this map was made as a “Sportsman’s edition” at a time when the state fishing license was a whopping three bucks. Not to mention, the last time a native species—the rainbow trout—had been caught in the LA River was way back in 1940 (according to records), so perhaps Eddy did not consider freshwater possibilities all that strong.

All of this geography emanated from the tall building at 4680 Wilshire Boulevard, where Farmers Insurance is still headquartered to this day.