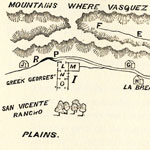 Despite its apparent simplicity, this map illustrates one of the more colorful sagas in local history. It was created by Benjamin Truman Cummings of the LA Star newspaper, who was one of only three journalists allowed to interview Tiburcio Vasquez, one of the first in the long-line of celebrity criminals in Los Angeles. This map seems to be the most accurate representation of the events that lead to Vasquez’s capture in May 1874 after years of evading authorities. The “mountains where Vasquez lurked” are most probably the Hollywood Hills and  “Greek George’s” is likely the home near the corner of Fountain and Kings Road in West Hollywood where Tiburcio holed up. During their time on the run, Vasquez’s “gang” of outlaws roamed from the Arroyo in Pasadena to Eagle Rock to the East San Fernando Valley, all the while puzzling Southern California’s lawmen. Finally a tip from a turncoat partner in crime directed a six-man posse to the place where Tiburcio was arrested following a rather one-sided gun battle.

Vasquez claimed he was seeking revenge for the how poorly the Mexican Californios were treated by the bullying Americans who took over before and after California gained statehood in 1849. Vasquez was educated and hailed from a rather distinguished family but got on the wrong side of the law after an argument at a party ended in the death of a constable. A long line of admirers visited Vasquez during his nine-day-long incarceration, including plenty of ladies of Los Angeles. He gave autographs, signed photographs, and regaled his visitors with stories of the days of the Californios. In the end, his charm could not keep him from being hanged March 19, 1875 at San Jose for a death that occured during a robbery at Los Pinos.

Photo: From Benjamin Truman Cummings’ ”Tiburcio Vasquez, The Life, Adventures, and Capture of the Great Californian Bandit and Murderer.” Printed at the offices of the Los Angeles Star, 1874.