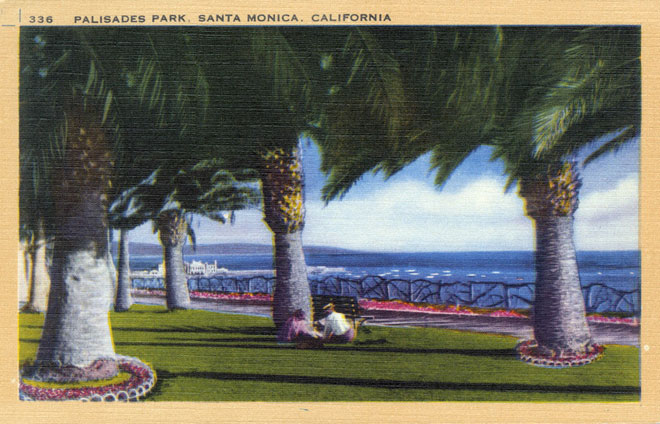 Encompassing 26 acres atop Santa Monica’s coastal bluffs, Palisades Park is something of an anomaly. In a region that places a premium on private beachfront property and commanding views of the Pacific, how did so much prime coastal real estate become a treasured part of the public domain?

In the 1890s Santa Monica had become a booming resort town. Tourists flocked to tent cabins on North Beach or to the elegant Arcadia Hotel, where they could ride a gravity railroad—a sort of early roller coaster—down to white-sand beaches. U.S. Senator John P. Jones, meanwhile, reveled in his daily strolls across the town’s coastal bluffs. According to local lore, Jones, a mining baron who co-founded the town in 1875, brought his dogs to the palisades each evening to watch the sun sink into the Pacific.

In 1892, Jones and his business partner, Arcadia Bandini Baker, moved to preserve the bluffs’ charms for the public enjoyment. Despite the land’s obvious potential as real estate, Jones and Baker deeded it to the city on the condition that it forever remain public parkland. Linda Vista Park, later renamed Palisades Park in the 1920s, was born.

The park has changed much over the years. At first, visitors could walk right up to the edge of the cliff. In the interest of public safety, the city later added fences made of eucalyptus branches. In 1913, landscape architect I.G. Le Grande gave the park its first formal design, installing a long, winding footpath and adding rows of Canary Island date palms and Mexican fan palms to the eucalyptus trees that already lined Ocean Avenue. Later, the park gained several monuments to the city’s cultural heritage in the form of statues, pagodas, and memorial plaques. As it grew in amenities, Palisades Park shrunk in acreage. Numerous landslides have reshaped the park’s edge; in some places, erosion has sheared off nearly 30 feet of sandstone.

Cooled by ocean breezes, the park where Jones watched the Sun set has become a popular venue for joggers, yoga practitioners, and physical fitness enthusiasts. Recently the park has been at the center of a debate over the use of public spaces by personal fitness trainers in Santa Monica. In response to complaints from residents about large groups of exercisers and early morning noise, the Santa Monica Council is scheduled to discuss ways to regulate usage of Palisades Park next month.