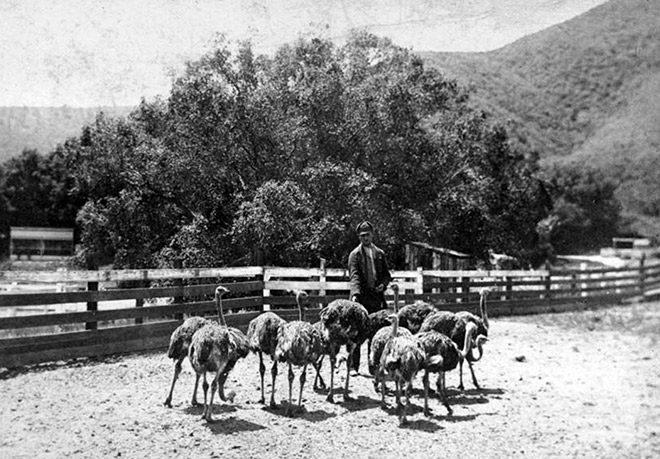 Ostriches—without them, we might never have gotten Griffith Park or Sunset Boulevard. In 1885, 34 of the large, ungainly birds arrived on an oak-dotted, 680-acre site on the bank of the Los Angeles River. A joint venture of Rancho Los Feliz landowner Griffith J. Griffith and English naturalist Charles Sketchley, the commercial farm primarily raised the ostriches for their feathers, which thanks to a trend in women’s fashion were selling for as much as $5 each.

But tourism provided another important revenue stream, as Angelenos loved to gawk at the lanky creatures from Africa. They particularly delighted in feeding whole oranges to the birds and watching as the fruit slid down their long gullets. To transport sightseers back and forth, Griffith and Sketchley built the Ostrich Farm Railway through the undeveloped ravines and hills that separated the farm from downtown Los Angeles. Once there, visitors enjoyed the farm’s hiking trails and picnic grounds in addition to the main, avian attraction.

Financial difficulties forced Griffith and Sketchley to close their operation in 1889, but the farm spawned imitators across Southern California. It also, local historian Mike Eberts suggests, inspired Griffith to later donate much of his real estate to the city as public parkland. And the Ostrich Farm Railway? That became the stretch of Sunset Boulevard that today winds its way through the hilly terrain of Echo Park and Silver Lake.

Above: Ostriches on Rancho Los Feliz, circa 1885-89. Courtesy of the USC Libraries – California Historical Society Collection.