Home Uncategorized CityDig: The Oak That Grew Out Of Orange Grove Avenue 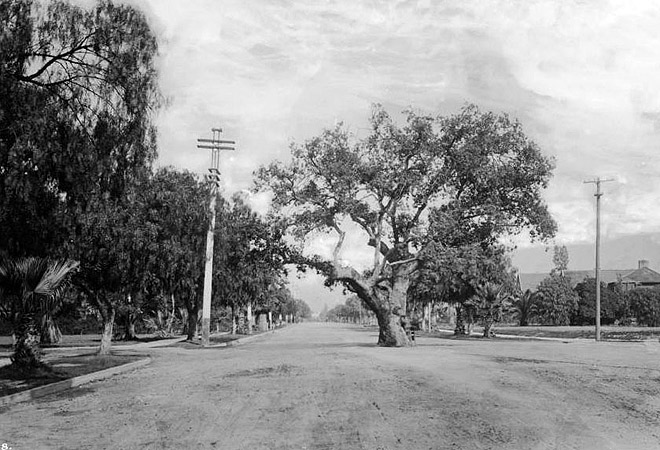 It was no accident of haphazard surveying. It was a deliberate act of town planning that placed a massive oak tree in the middle of a major Pasadena intersection. When Calvin Fletcher laid out the San Gabriel Orange Grove Association subdivision in 1874, he oriented the main thoroughfare, Orange Grove Avenue, so that it would wrap around at least two ancient live oaks. Shade was a precious commodity on Pasadena’s mostly treeless mesa, and Fletcher’s plan saved these sprawling oaks by incorporating them into the avenue’s landscaped median.

As Fletcher hoped, they would become landmark specimen trees. One grew from the middle of Orange Grove Avenue near Columbia Street. Another—seen above circa 1905, courtesy of the California Historical Society Collection at the USC Libraries—rose from the center of Orange Grove’s intersection with California. Here, the orange growers who would found Pasadena reportedly picnicked under the oak’s boughs shortly after arriving from Indiana. Later, the tree’s limbs would shade the town’s first schoolhouse, and a local artisan built a rustic bench that sat against the trunk.

But Fletcher’s gesture of respect ultimately doomed the landmark tree at Orange Grove and California. Improvements to the roadway—first dirt, then paved—came at the expense of the tree’s roots, which struggled to draw water from the ground. It didn’t help that around 1895, a group of boys had accidentally set fire to the branches while trying to smoke out a hive of bees. As the tree sickened, Pasadena took extraordinary measures to save it. The local water utility installed a hydrant to quench the tree’s thirst, and concerned residents brought in two tree surgeons to excise the oak’s decay and seal its wounds. It wasn’t enough. In the summer of 1911, workers removed the dying tree from the place it had stood for decades, maybe centuries—long before Pasadena appeared on the map.