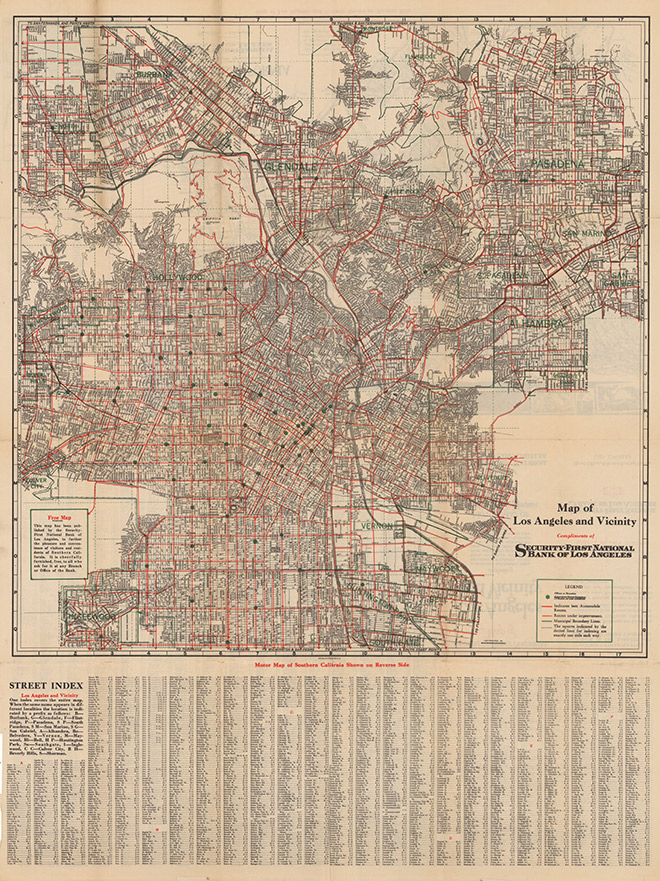 Normally I try to tell a story connected to a map as a whole, but this week I’d like to put forth some specific questions connected to the streets on this map. Somewhere in the legions of history wonks and map nerds there lies an explanation for the mysterious streets of Elysian Park whose names hearken back to the classical era. Some are Greek, some Roman, but all are from literature and mythology dating back to the 10th century BC. The streets appear on similar maps in the 1920s and then fade from view in the mid-1940s.

It is cartographic fact that fake streets are sometimes listed on maps, but never in this number (a dozen), give or take a Peloponnesian War or two. It seems as though some classically educated landowner or cartographer decided to add a little erudition to the L.A. landscape though these paper roads are not mentioned in literature searches or (for the most part) in city directories.

The publishing date here (1932) could indicate a nod to the Olympics in L.A. and maybe even the streets of a possible Olympic Village, but the athletes’ quarters for those games were in the Baldwin Hills area, miles away from the region seen on the map above. Also, these Greek- and Roman-inspired streets start popping up on maps in the mid-1920s, years before the Olympics even took place. We must also rule out the area being changed to the nearby small communities of La Loma, Bishop and Palo Verde, which were already in full flower by the teens. A more detailed snapshot of the streets in Elysian Park

Some of these street names reappeared years later when the Mt. Olympus neighborhood of the Hollywood Hills area was developed, but many had short lives in the hills near Chavez Ravine. In Greek mythology, Elysian Fields was the name given to the afterlife for those chosen by the Gods, so Apollo and Hercules, sons of Zeus, and Danae (who produced son Perseus with the big man himself) would be shoo-ins, but the streets in the Park also included Venus and Juno, both Roman goddesses, and Hermes (not-so-ironically known as the Greek God of roads).

Also carved into the ravine was Achilles, the greatest warrior in Homer’s The Iliad (which, by the way, was another one of the streets). Socrates, the Athenian sage and founder of Western Philosophy was up there along with Electra of Sophocles and Euripides fame. Slightly less mythological celebrities appear in the hills in Elysian Park: Antilco, the tyrant of Chalcis; Nausicaa, another character in Homer’s The Odyssey; and a place in Thrace called Odessus (or maybe that is a typo of Odysseus, the Greek king of Ithaca and hero of The Odyssey). The questions remain about who named the streets, what each looked like, who lived there, and most mysteriously: how did they vanish from the landscape?