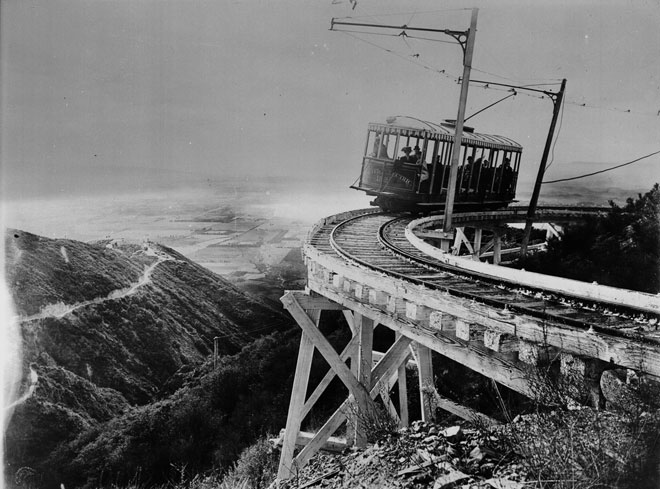 Photograph courtesy of the Metro Transportation Library and Archive

Call it 19th-century L.A.’s idea of a thrill ride. Leaving the safety of the granite slopes, trolley cars raced out onto a creaking, cantilevered wooden trestle, soaring over a 1000-foot sheer drop—with no reassuring seat belts or safety bars.

Even without Circular Bridge, the Mt. Lowe Railway would have been judged an engineering marvel. From the flatlands of Altadena to the Alpine Tavern on Mount Lowe, the “Railway to the Clouds” gained 3,121 feet in elevation over 5.7 miles. Climbing one of the steepest mountain ranges on the continent between 1893 and 1938, the railway twisted and wound its way up a roadbed blasted from granite. The longest straight stretch measured a mere 225 feet. On one segment, passengers transferred to an incline railway that scaled the mountainside at a 60-percent grade, and at the railway’s upper reaches, snowdrifts buried the tracks in winter months.

But Circular Bridge, with its views of Catalina, was a highlight of a passenger’s ride as well as an ingenious feat of engineering: a bridge that made nearly a full circle while climbing a steady 4.5 percent grade. It was engineer David Joseph MacPherson’s solution to a vexing problem: without a switchback, the steel-on-steel traction railway—limited to a maximum grade of seven percent—could never achieve the elevation it needed to get to the top of the line. But rail cars require a wide turning radius, one not possible in the San Gabriel Mountains’ rugged topography. So, for a brief moment, the railway left the mountainside.