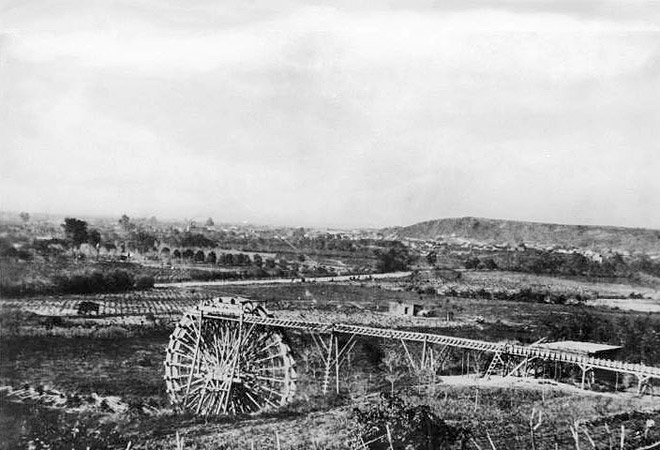 Clean, drinkable water delivered directly to the home—to Angelenos of 1859, it was a revolutionary concept. Since its founding in 1781, the city had always found a reliable source of water—for irrigation, bathing, and drinking—in the Los Angeles River, but the water’s quality was a constant concern.

The problem lay in a series of open ditches, or zanjas, that carried water from the river to the town’s fields, vineyards, and houses. Uncovered and unprotected, the canals attracted contaminants: people bathed, washed laundry, and even slaughtered cattle in them. Drowned animals were often hauled out. Occasionally human bodies were, too. And because the town’s roads forded the zanjas without the benefit of bridges, horses and livestock routinely splashed through the town’s water supply. It’s no surprise that many residents scorned the zanja water for household use, instead paying water carriers a weekly fee of $0.50 per bucket for a daily delivery of fresh river water.

Enter William G. Dryden and his water wheel. A colorful judge known for his profane tirades, Dryden realized that the natural artesian springs on his property, located near present-day Chinatown at Alameda and College, could provide a safe, clean source of water for domestic use. Between 1858 and 1859, Dryden’s Los Angeles Water Works Company constructed a 40-foot water wheel in the city’s main irrigation ditch, the zanja madre. The wheel didn’t lift the water itself; instead, it powered a pump that drew the spring water over a bluff and into an elevated flume that led to an enclosed brick reservoir in the middle of the city’s plaza. From there, buried wooden pipes delivered the fresh spring water directly to subscribers’ homes.

The water wheel—perhaps the one pictured above—briefly solved the city’s domestic water problem, until a flood of historic proportions inundated the city in December 1861 and January 1862. Dryden’s new delivery system was in shambles, and the water carriers were back in business.