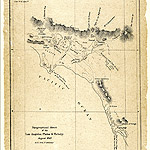 Edward Otho Cresap Ord is the cartographer most famous for creating the very first surveyed map of the city of Los Angeles, but he also made this simple sketch-map of the entire region while on another mission. While the “Ord Survey” of 1849 was created expressly for the new American city of Los Angeles so the Ayuntamiento (City Council) could determine taxation, this small map had an entirely different purpose: it was attached to a report Lieutenant Ord made to Brigadier General Bennet Riley, the last military governor of the territory of California, dated at Monterey on October 31, 1849. The map reflects an expedition Ord made, traveling by steamer to San Diego and then up to Los Angeles by land, in the hopes of answering certain questions (whether or not the Piute Indians or other tribes could trek over the mountains and into the basin, for example, or if there were an easier avenue to New Mexico besides the grueling Gila Route).

The entire report was presented to the 31st Congress, first session as Senate Executive document No. 47 “Report of the Secretary of War Communicating Information in Relation to the Geology and Topography of California…” What’s amazing is that this was just a side-job for the brilliant and tireless Ord, who graduated from West Point (where he shared a room with W.T. Sherman), fought in the Indian Wars and the Second Seminole War, commanded the Army of the James in the Civil War, and was instrumental in Lee’s surrender at Appomattox. Lest you worry, he certainly had a private life: Ord was the father of 13 children.

The map is relatively simple, offering few details save the major features of the “Los Angeles Plains.” You can make out the San Fernando and San Gabriel Missions, the actual pueblo of Los Angeles, the important San Fernando Pass, and the small but flourishing Port of San Pedro that was soon to be transformed by Phineas Banning. Ord also notes “pitch springs,” which later would figure into the oil booms of the 1890’s and 1920’s, as well as Palos Verdes, Baldwin Hills, and rough depictions of the Santa Monica, San Gabriel and Santa Susana mountains of the Transverse ranges.

Though he only identifies the San Gabriel River on the sketch, Ord does note the S. Gorgona (San Gorgonio) and the S. Fernando (Newhall) Passes that would one day connect the area to the San Fernando Valley. China seems to be Chino, where those exhausted emigrants from the Gila route might find an end to their journey to Southern California.

Above: Topographical Sketch of the Los Angeles Plains and Vicinity, August 1849, E.O.C. Ord