Home Uncategorized CityDig: The Los Angeles Harbor in The Making 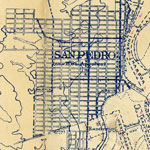 This map contains plenty of history and hints at how Los Angeles would become the shipping capitol of the West Coast. The layout seen here is a far cry from the sad and desolate spot described just 69 years earlier in Richard Henry Dana’s “Two Years Before the Mast.” This is an area brimming with optimism and possibilities. After much political wrangling the area had won its fight with Santa Monica to get the harbor and San Pedro and Wilmington were annexed by Los Angeles in this year.

City fathers had used eminent domain to push a shoestring attachment of land from downtown to make one continuous strip in 1906 and, with it, a “contiguous jurisdiction.” When the Board of Harbor Commissioners was created in 1907 it began harbor improvements that would include an 8,500-foot section of breakwater, the widening of the main channel, and the dredging of the channel to 30 feet.

Coinciding with the transformational opening of the Panama Canal in 1914, The Southern Pacific would later build a wharf where cargo could be loaded and unloaded briskly. Engineer and director Amos A. Fries often butted heads with railroads during that project but became much more famous for his rabid anti-communism during and after World War I. Because it was the nearest major U.S. port west of the Canal, Los Angeles was set to reap the whirlwind of trade that came after World War I.

The map shows the new breakwater plans, the dredging locations, the city boundaries, and which land will be reclaimed during the project. Visible are Deadman’s Island, which disappeared in another harbor improvement in the 1920s, the colorful Mormon Island that was connected to the mainland, and the storied Terminal Island. Both Mormon and Terminal islands have enough stories to require histories unto themselves. At the southern point of the map stands the Pt. Fermin Lighthouse, built in 1874 although Phineas Banning requested it 20 years earlier. Banning was the first to recognize the harbor’s importance and create a small railroad, plus a prosperous shipping business. The beautiful old lighthouse still stands but has not been lit since the bombing of Pearl Harbor in 1941.

Above: Map compiled under the direction of Captain Amos A. Fries, J.R. Mauran cartographer, Corps of Engineers, USA, August 1909.