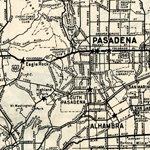 Once upon a time Los Angeles was one of the greatest golf towns in the world with a fine selection of first-rate eighteen hole courses that were available for play all year round. An astounding 40 courses are shown on this map, which was presented to customers of the Security First National Bank at a time when the city relied on tourism to rise up out of the economic depression gripping the country. Almost half of those listed here are public courses, and for a population of just 1.2 million folks that was a lot of links, and offered plenty of opportunities for golfers from all over the country to play at these lush country clubs and extremely nice public courses. Golf fever had gripped Los Angeles from as far back as the 1890s, and with the great weather and an abundance of recreation opportunities the sport grew to immense popularity. The Los Angeles Open, the first of the major tournaments, was inaugurated at the Los Angeles Country Club just six years before this map was published and then alternated between some of the classic early courses like Wilshire, El Caballero, Hillcrest, and Riviera. Some of the best golf course designers, like Billy Bell and George Thomas, worked here, creating golfing masterpieces throughout Southern California.

The map is also a sad tribute to a number of beautiful courses lost to the struggling economy and eventual housing development. Here is the swank Midwick in Monterey Park, the beautiful Royal Palms in San Pedro, the majestic Flintridge Country Club that looked down from the base of the San Gabriel mountains, the Inglewood Country Club where the “Fabulous” Forum now stands, the Hollywood Country Club where Harvard-Westlake school now sits, and the Pasadena Golf Course in Altadena where the common man could occasionally make that long putt. To better serve those who best loved “a good walk spoiled,” the map lists motor routes to all of the courses and even a directory of aviation fields for the sport’s flying fans.

Above: Motor Routes of Los Angeles and Vicinity Including an Index to Country Clubs and Golf Courses, Compliments of Security First National Bank of Los Angeles 1932