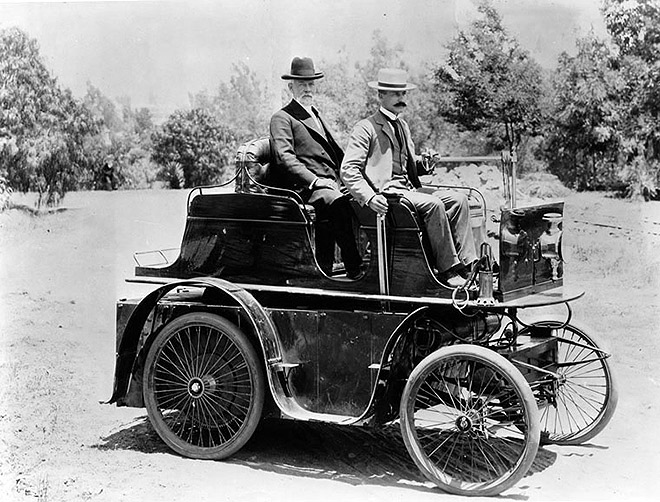 J. Philip Erie and Samuel D. Sturgis were about to make local automotive history, and no one would be around to see it. That was the way the two inventors planned it, afraid a gawking crowd would interfere with their test drive—or worse, witness its failure.

At 3 o’clock in the morning on May 30, 1897, while most of the city was still asleep, Erie, Sturgis, and a couple of workers rolled the new machine from Sturgis’s shop on Fifth Street to Broadway. Clutching a candle for illumination, Erie turned a crank to start the engine and climbed aboard with Sturgis, their wives, and a few guests. Erie then rang a bell, pulled a lever, and set off on the first documented automobile ride in Los Angeles history.

Nearly two years and $30,000 in the making, the Erie & Sturgis Gasolene Carriage, built from scratch based on Erie’s own designs, was roughly half the weight of the steam and electric automobiles appearing elsewhere across the country. Theoretically, the lightweight vehicle could have achieved speeds of 25 mph and reached San Francisco on a single tank of fuel—gasoline, preferably, but in a pinch kerosene oil or naphtha would have worked, too.

Unfortunately, the test drive failed to demonstrate the machine’s full potential. With only one of its engine’s four cylinders in operation, the experimental automobile puttered along at six mph—well below the legal limit for electric railcars (12 mph) or even bicycles (eight mph). Still, the car—variously reported in newspapers as an “automobile carriage,” “motor tally-ho,” and “horseless carriage”—managed to parade through several downtown city blocks before crossing the river and coming to rest in Boyle Heights.

Erie and Sturgis made a few more trial runs around Boyle Heights before chronic overheating and other mechanical issues forced them to abandon the project. But while L.A.’s first horseless carriage might have been a failure, an Illinois-manufactured automobile arrived in 1899, and Los Angeles began manufacturing its own cars again in 1902. Soon enough, the city would be swarming with thousands and then millions of the gas-powered vehicles.