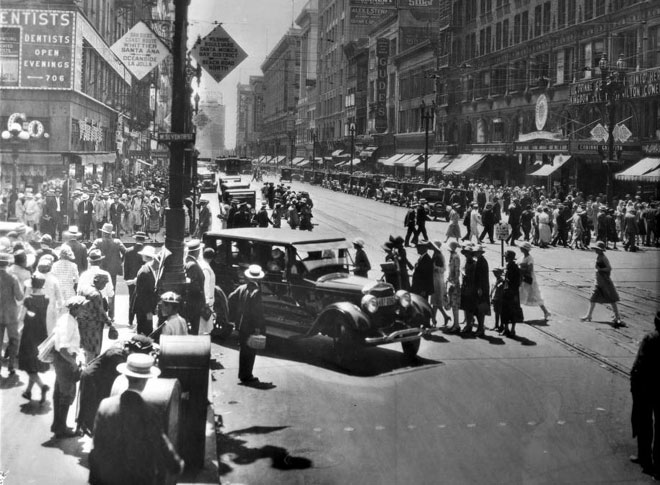 With apologies to Woody Allen, making a right turn on a red light is certainly not Los Angeles’ only cultural advantage. In fact, while it was once a Los Angeles idiosyncrasy, today the maneuver is permitted nationwide, with some local exceptions.

Los Angeles has adjusted the rules governing the turn since 1925, when it first sanctioned the maneuver as part of a congestion-relief measure. At first, drivers turning right could roll through the intersection without stopping—an allowance revoked by the city council in 1929. And from 1945 to 1947, thanks to a short-lived statewide ban, drivers could turn against a red light only where signs expressly allowed it.

For decades the right turn on red remained a West Coast eccentricity, best associated with Los Angeles. But amid the fuel shortage of the 1970s it became a nationwide norm as many localities across the United States—despite concerns about pedestrian safety—began permitting it in the interest of energy conservation.

The rules governing right-turn signals have also evolved. Today, blinking electronic lights broadcast a driver’s intent to turn, but Los Angeles motorists once signaled by hand. An early local custom required drivers to extend their arm through their car’s right-side window before turning right—a trick that became quite a stretch as automobiles widened and left-side controls became standard. In 1914, authorities introduced a new right-turn signal—a circular motion made with the left arm—that never caught on. Finally, four years later, the Automobile Club introduced a new set of arm signals originating in Portland, Oregon. The system, which became state law in 1923, called for drivers to signal a right turn by bending their left arm upward at the elbow.

Above: An automobile turns right at Broadway and Seventh Street in Los Angeles, 1926. Courtesy of the USC Libraries – California Historical Society Collection.

RELATED: CityDig: The History of Turning Left in Los Angeles