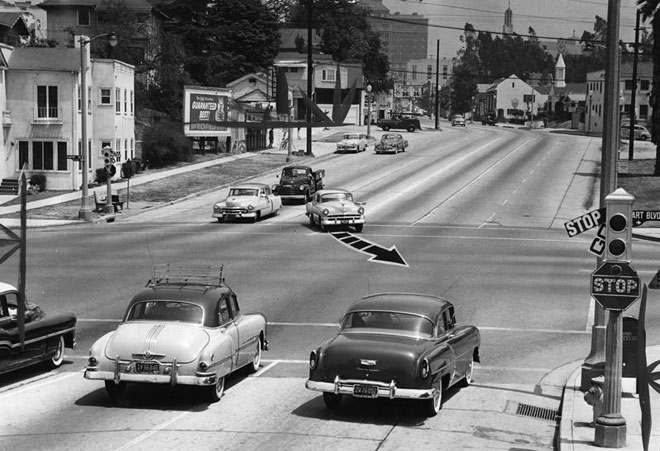 The unprotected left turn: nothing haunts Los Angeles drivers like the prospect of swinging their car in front of oncoming traffic. Mastering the maneuver is a rite of passage for new L.A. motorists.

Left turns have long challenged motorists’ patience—and common sense. A left turn from the right lane? In 1923, L.A. drivers attempted the risky move often enough to provoke a disapproving advisory opinion from the Auto Club. The 1955 photo above illustrates another hazardous technique: “darting,” once practiced by impatient drivers.

Street design and traffic laws were slow to enforce prudent turning practices. Arm signals (hand outstretched for a left turn, raised for a right) weren’t mandatory until 1923. And left-turn pockets didn’t appear on most L.A. roads until 1956; before then, cars waiting to turn left shared a lane with thru-traffic, as if inviting a demonstration of their rear bumpers’ effectiveness. Protected left-turn signals—first introduced on Sepulveda Boulevard in 1956—are still uncommon on L.A. streets today.

A 1957 revision to the state vehicle code ushered in the most dramatic change in how Angelenos turned left. Before, drivers generally yielded only to vehicles already at the intersection. Unlike today, a driver could start a left turn unless opposing traffic presented an immediate hazard—and the oncoming cars would be required to stop and wait. After the law’s revision, left-turn drivers were not allowed to proceed unless they could safely clear the intersection before any opposing traffic reached it. Social conventions like the two-car-per-light rule followed.

The left turn presented such a challenge to motorists’ safety and the free flow of traffic that Los Angeles once tried to engineer it out of existence. For five months in 1922, an experimental traffic circle at Wilshire and Western eliminated left turns by forcing all traffic to flow counter-clockwise through the intersection. Traffic circles never caught on in L.A., but later innovations like the cloverleaf interchange would liberate the city’s freeway network from the pitfalls of the left turn.