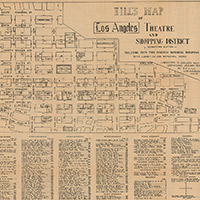 Here we see L.A. as it was in Gatsby’s time, at the outset of the roaring twenties, in an era of unbridled growth and seemingly unlimited prosperity. The Great War was fading from memory (as was the terrible flu pandemic) and the economic crash was still six full years away. Mass produced automobiles, some 430,000 thousand of them in the county, were filling the roads, and downtown was a magnet that helped grow the local population to nearly one million by the decade’s end.

The map boasts of two hundred buildings downtown within this slightly cockeyed grid.  Angelenos were reading about these new-fangled moving pictures with sound, the big Angelus Temple being built by preacher Aimee Semple McPherson, Charlie Chaplin getting engaged to Pola Negri, Fatty Arbuckle’s return from exile, and Cecil B. DeMille offering a thousand bucks to anyone who could give him an idea for a blockbuster movie (eventually The Ten Commandments).

Hill’s map completely ignores the decrepit old Pueblo and focuses on the rather modern city center along Broadway, Spring and Main with nearly 25 theaters and 9 department stores including the Broadway, Bullocks, Hamburgers/May, and Robinsons. The old City Hall sits at 2nd and Broadway, the County Courthouse is at Broadway and Temple, and the public library is ready to bust out of the Metropolitan Building and take up residence at the beautiful new facility on Normal Hill around 5th and Grand.

There are three each telegraph, steamship and railroad ticket offices along with the three great rail depots for the Southern Pacific, the Santa Fe and the Union Pacific. Instead of drawing the lines on this mostly clean map, both the Pacific Electric (Red Cars) that served outlying areas and the Los Angeles Railway (Yellow Cars) are identified at the bottom. Locals would have known the cars by their routes as the “J” car or the “V” car or “D” cars, shown on this map by their terminal and principal points.

Several far-flung spots are suggested for tourists including Exposition Park (where the grand Coliseum was being completed) and the Museum of Science, History and Art, which sat near USC. Road trips are also suggested to the Hollywood Bowl, the Ambassador Hotel and Sycamore Grove for picnics.