Home Uncategorized CityDig: The Dammed Past of Devil’s Gate 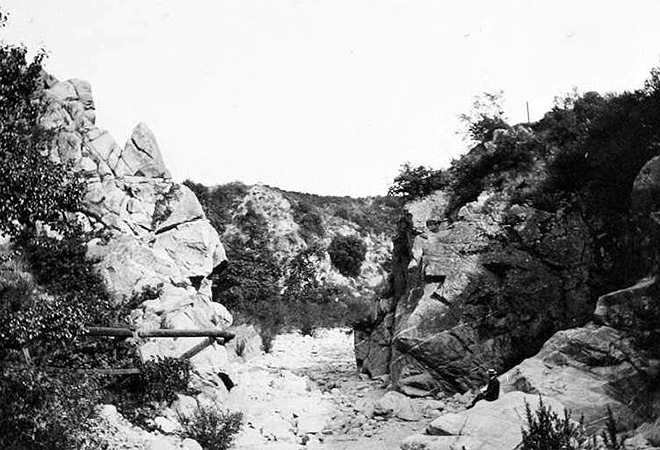 Residents of 19th century Pasadena must have delighted in the mild irreverence of a picnic at Devil’s Gate—a name suggesting a fiery hellmouth rather than the picturesque gorge that it was. There were no screams of agony here; only a singing brook. No sulfuric stench; only the scent of sagebrush. As the picnickers knew, it was a granitic crag whose profile reminded some of Satan that gave this narrow passage of the Arroyo Seco its demonic name—not any real associations with the underworld.

In the prehistoric past, Devil’s Gate was not a gate at all but a natural dam, formed where the stalwart granite of the San Rafael Hills merged with the bajada of the San Gabriel Mountains. For a time, this dam held back a natural lake fed by mountain streams. Then one day the dam burst. Spilling over the top, rushing water exploited weaknesses in the granite and punched a narrow gap through the rocks, unleashing a flood wave downstream. The gate—and its peculiarly shaped crag—was born.

Disastrous floods in 1914 and again in 1916 prompted Pasadena and the Los Angeles County Flood Control District to reverse the work of that ancient cataclysm. Between 1919 and 1920, the Los Angeles County Flood Control District erected an arched, concrete dam just upstream from the Devil’s Gate formation. Soon the prehistoric lake returned, a 125-acre sheet of water as deep as 80 feet. But nature apparently did not want a lake there. Slowly, the reservoir filled with silt, gravel, and other sediments washed down from the San Gabriels. Today, the clogged-up lake is part of Pasadena’s Hahamongna Watershed Park.

Despite its innocent origins, Devil’s Gate did eventually acquire dark associations—perhaps the inevitable consequence of such a name. In the late 1930s, Jack Parsons—a rocket engineer and co-founder of NASA’s Jet Propulsion Laboratory—became a disciple of Aleister Crowley and reportedly performed Thelemic rituals near the dam, invoking Pan before testing his latest experimental rockets. Parsons’ chanting, Crowley declared, opened a portal to Hell, and ever since a chorus of hushed warnings and tall tales have swirled around the former picnic spot.

Above: A lone picnicker at Devil’s Gate. The rock face on the left was said to resemble a horned devil. Courtesy of the USC Libraries – California Historical Society Collection.