Home Uncategorized CityDig: The Collapse of the Downey Avenue Bridge 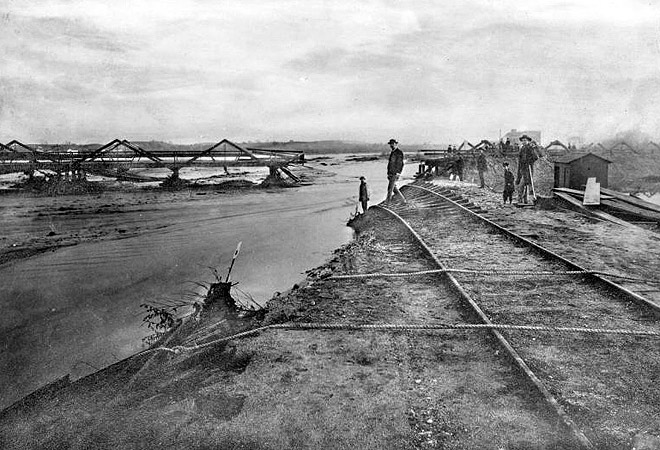 The five of them—three passengers, a driver, and a horse—were in a precarious position. Their streetcar, the first of the morning, had just rolled onto the middle section of the Downey Avenue Bridge when the entire wood-and-steel structure began to sway. A dozen feet beneath them, the Los Angeles River was a boiling cauldron of water, mud, rocks, and timber—the result of thirteen straight hours of intense rainfall the previous day, January 19th, 1886.

The two passengers in the back of the car must have seen what was coming next: the turntable of the Los Angeles and San Gabriel Valley Railroad, unmoored by the floodwaters, was spinning toward them in the torrent. The men leapt from the car’s rear platform and onto the bridge as the turntable plowed into an adjacent section of the span. The car, along with the horse and the other two men, disappeared into the river.

They were lucky. The railcar landed upright and, as the Times reported the next day, “made a not very bad impromptu ferry boat.” The horse escaped its fetters, and the men floated with the car at least a hundred yards downstream before coming to rest on a sandbank. A daring police officer, Santiago Arguello, reined his own horse into the water and rescued everyone. Later, standing safely on the riverbank, a photographer recorded the scene of destruction in the image above.

The flood of 1886 carried away houses, washed out bridges, and severed telegraph and railroad lines, practically isolating Los Angeles from the outside world for several days. But it was far from the city’s worst—a truly Noachian deluge in January 1862 transformed much of the Los Angeles Basin into a great lake—and similar events continued to menace Los Angeles well into the twentieth century, until county and federal agencies built a massive flood control network to check the river’s fury.